Kang Chang-il, leader of the South Korea-Japan Parliamentarians' Union and a lawmaker of South Korea's ruling Democratic Party, made the remarks during a press conference with a group of South Korean correspondents stationed in Tokyo.

"President Moon has spoken by phone with Prime Minister Shinzo Abe nine times (since he came to office in May this year) while trying to resolve a diplomatic row with China over the deployment of the U.S. Terminal High Altitude Area Defense missile system," Kang said.

"Relations between the two countries are improving at a slow clip."

On Monday, the 58-member fraternal group of lawmakers from both countries paid a visit to Abe after holding a meeting to discuss ways to enhance Seoul-Tokyo relations and get over the growing threat from North Korean missile and nuclear programs.

At the Monday meeting, the South Korean and Japanese lawmakers came up with a recommendation that Abe visit South Korea to hold a summit and attend the 2018 PyeongChang Winter Olympics, Kang said.

"I understand the two countries' governments are discussing an option to hold the summit talks prior to the Olympics," he said.

The first Winter Olympics in South Korea are scheduled for Feb. 9-25 in the alpine city of PyeongChang and nearby towns of Gangneung and Jeongseon.

Kang said he has asked Abe to resume the shuttle diplomacy and visit PyeongChang if an early summit between the two leaders falls through.

Shuttle diplomacy refers to the leaders of the two countries visiting each other's countries roughly every year. In 2004, South Korean President Roh Moo-hyun agreed with Japanese Junichiro Koizumi to start shuttle diplomacy that stalled the year following a visit to Yasukuni Shrine by Koizumi. South Korea views the Yasukuni Shrine -- which honors over 2.4 million war dead, including 14 convicted Class-A war criminals -- as a symbol of Japan's past imperialism.

Since December 2011 under the administration of President Lee Myung-bak, South Korea and Japan have suspended shuttle diplomacy due to Tokyo's territorial claim to the South Korean islets of Dokdo and the dispute over Japan's sexual slavery of Korean women during World War II, among others. President Park Geun-hye never visited Japan when she was in office. 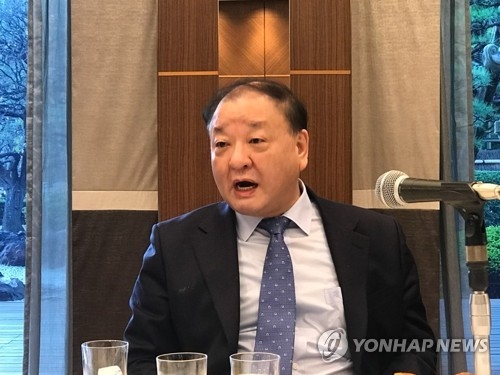