Shin's side won the inter-Korean football match 1-0 at the East Asian Football Federation (EAFF) E-1 Football Championship at Ajinomoto Stadium in Tokyo, thanks to an own goal by North Korean defender Ri Yong-chol.

South Korea came up with a 3-4-3 formation against North Korea, changing from their 4-2-3-1 system in the tournament opener against China last Saturday.

"Because we made a tactical change, I think it was difficult for North Korea to analyze our team," Shin said at the post-match press conference. "North Korea would have expected us to use the back four, and tried to attack through counterattacks, but because we used the back three, I think they had a difficult time."

In the back three system, two players -- Jin Seoung-uk and Jeong Seung-hyeon -- also made their international debut. Shin said they also executed the game plan well.

Shin said he decided to use the back three in preparation for the 2018 FIFA World Cup. South Korea are paired with Germany, Mexico and Sweden in Group F at football's showpiece event in Russia.

"When we enter the World Cup, there are teams who are stronger, so that's why I tested the back three," he said. "Our offense was not sharp today, since our players were staying a little more behind than usual."

Shin also urged his forwards to step up their game and start scoring goals.

This was South Korea's first win at the four-nation tournament. The Taeguk Warriors played to a 2-2 draw with China to open the tournament.

Shin's team will wrap up the competition on Saturday against hosts Japan. Shin said he hopes both teams can play a good match as they will represent Asia at the World Cup.

"I know we're in Japan's home, but I believe we can play better," he said. "Since both teams go to the World Cup, I hope we can play a good game and collect a win." 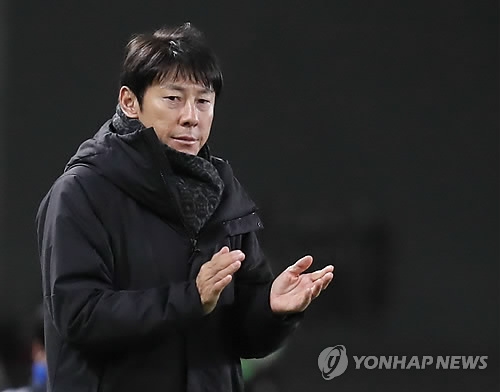