North Korea fell 1-0 to South Korea at the East Asian Football Federation (EAFF) E-1 Football Championship at Ajinomoto Stadium in Tokyo after their defender Ri Yong-chol put the ball into his own net.

Andersen said his side couldn't execute tactics that they'd planned.

"Today, we were pressing (the opponents) too little," he said after the match. "We made too many mistakes."

The 54-year-old Norwegian said North Korea's defense was "not bad," but the team lacked offense.

"We lost the ball early in the buildup," he said. "I think the last 15 minutes before half time wasn't bad for us. I spoke (to the players) in half time that we should attack them in the front, but we had a difficult game."

This was the first time that Andersen faced South Korea since he took over coaching for the communist state last year. When asked about his first impression of South Korean football, he said they are a strong team.

"Everyone can play football and the players are physically and technically good," he said of South Korean players. "We had a big problem to attack them and create chances."

Andersen, former manager of German Bundesliga side Mainz05 and Karlsruher SC, said he couldn't make many changes to his lineup due to the team's lack of depth.

"We don't have so many good players like Japan or South Korea," he said. "We have a small group, so it's always difficult for me to change many players." 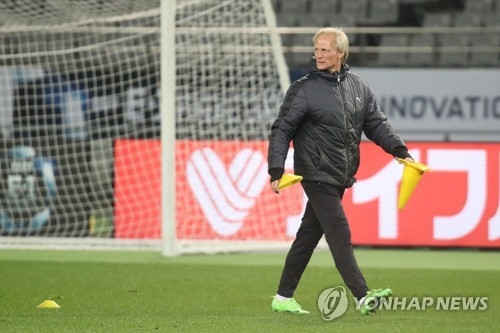