TOKYO, Dec. 12 (Yonhap) -- For those who already watched the women's inter-Korean football match in Japan earlier in the week, Tuesday's meeting between the two Korean men's team felt like deja vu in terms of fan involvement. The match result, though, was different this time.

The Koreas are competing at the the East Asian Football Federation (EAFF) E-1 Football Championship for both men and women. And as they did for the women's showdown on Monday in Chiba, football fans from both Koreas gathered at Ajinomoto Stadium in Tokyo to cheer on their teams. Once again, North Korean supporters easily outnumbered South Koreans.

The men's inter-Korean clash was the 16th of its kind, but this was the first time that the two Koreas faced each other in Japan.

At Ajinomoto Stadium, more than 200 North Korean supporters who are believed to be members of Chongryon -- a pro-North Korean group in Japan that has maintained close ties with the communist regime -- occupied the southwest section of the stadium, although there seemed to be fewer fans than at the women's match in Chiba. 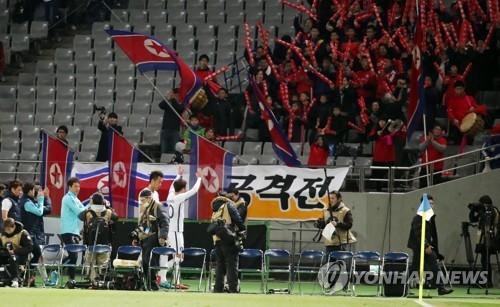 North Korean supporters were chanting their signature "Pilseung Joson," meaning "North Korea to the victory," in Korean, while hitting their red balloon sticks together and displaying North Korean flags.

They also hung banners that read "Let's win, our football players," and "North Korea football team to the victory."

The South Koreans were outnumbered, but much like on Monday they tried as they might not to get drowned out while shouting "Daehanminguk," and "Hankook," literally meaning Republic of Korea in Korean.

But on the field, South Korea prevailed, collecting a 1-0 win and avenging the women's 1-0 loss from the previous day.

North Korean supporters could have come down hard on defender Ri Yong-chol, who put the ball into his own net in the second half, but instead they made even more noise to try to will the players to get the equalizer.

In the end, they saw South Korea enjoy their victory, but no one seemed to be hostile toward their opponents. When South Korean players approached the North Korean supporters section after the match, some were seen clapping their hands to show their respect.

The presence of Japanese fans on Tuesday was the difference from the women's match. Some Japanese football supporters, wearing their national team's blue uniforms and scarves, were seen at the stadium even four hours before the Samurai Blue play against China.

In fact, the north and east sections of the stadium were already covered with banners encouraging Japan, while the two Koreas were still playing their match.