TOKYO, Dec. 12 (Yonhap) -- For South Korean striker Jin Seong-uk, it will be difficult to forget his first international opponents.

The 23-year-old played his senior international match against none other than North Korea on Tuesday. And he played better than expected.

Jin, who plays with Jeju United in the top-flight K League Classic, was a starting forward in South Korea's 1-0 victory at the East Asian Football Federation (EAFF) E-1 Football Championship at Ajinomoto Stadium in Tokyo. Although he failed to put his name on the score sheet, Jin still did his part in the victory, with Ri Yong-chol's own goal being the only score of the match.

Jin knocked on the North Korean doors frequently with his energetic moves around the box.

He started off with an attempt in the 37th, when his volley off Go Yo-han's cross flew past the left side of the post. In the 48th, he delivered a header off Kim Jin-soo's cross, but it went straight to goalkeeper Ri Myong-guk.

In the 57th, Jin nearly stunned North Korean supporters as his left-footed effort off Kim Min-woo's cross hit the post.

Jin, however, was pivotal in drawing the decisive own goal in the 64th. Ri Yong-chol put the ball into his own net when he tried to cut Kim Min-woo cross from the left flank before it reached Jin, the intended target of the pass.

After the goal, Jin was replaced by Kim Shin-wook in the 66th to end his first international match.

"I'm happy that our team won in my international debut, but it's a pity that I couldn't score a goal," Jin said after the match. "If I'd scored a goal early, we would have played the match more easily."

He previously played with South Korean head coach Shin Tae-yong at the under-23 level. He said the coach ordered him to play more aggressively in the second half.

"Since North Koreans sat back, we couldn't attack easily," he said. "They also have good counterattacks, so we decided not to hurry. It was good for me to get involved in drawing North Korea's own goal, but I should have concentrated more when I had chances." 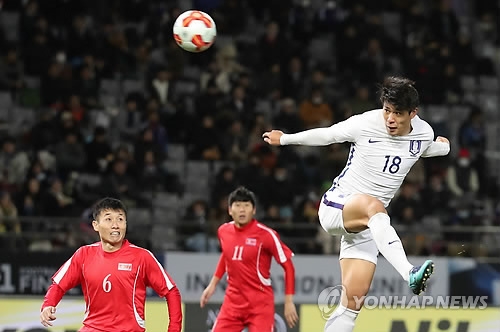