SEOUL, Dec. 12 (Yonhap) -- PyeongChang welcomed Russia's decision on Tuesday to back its athletes who will compete at next year's Winter Olympics in South Korea as neutrals.

The IOC suspended the ROC with immediate effect last Tuesday, and said only individual athletes who meet strict anti-doping conditions will be allowed to compete as "Olympic Athletes from Russia (OAR)." Their uniforms will bear the Olympic Flag instead of the Russian flag, and the Olympic Anthem, not the Russian anthem, will be played during medal ceremonies involving these athletes. 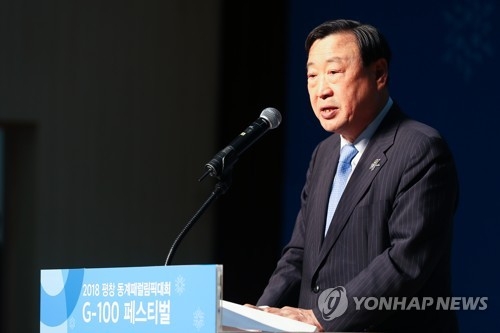 As Russia balked at the IOC's ruling, there was some speculation that the country might boycott the Olympics altogether. But Russian President Vladimir Putin said last week Russia "will not block" any Olympians from paticipating, and then the ROC on Tuesday offered its support.

"We expected Russian athletes to compete from the beginning," Lee said. "Even though the athletes won't be able to wear their national flag, they may be able to hoist it during the closing ceremony."

Lee was referring to a small opening in the IOC's ruling. It said it "may partially or fully lift the suspension of the ROC from the commencement of the closing ceremony" if the Russian Olympic body and participating athletes fully respect and implement the IOC's decisions.

Lee said as of last Friday, 93 nations had registered for the PyeongChang Olympics, which would make it the largest Winter Games ever in terms of participation. The Feb. 9-25 competition will offer a record 102 gold medals.