The remark came as tensions have increased over North Korea's nuclear and missile programs, including its latest test of an intercontinental ballistic missile on Nov. 29.

"We're ready to talk anytime North Korea would like to talk, and we're ready to have the first meeting without precondition," he told a forum co-hosted by the Korea Foundation and the Atlantic Council think tank. "Let's just meet. We can talk about the weather if you want."

It was a markedly different tone from Washington's earlier insistence that Pyongyang first halt its missile and nuclear testing, and demonstrate its sincerity about denuclearization.

"It's not realistic to say we're only going to talk if you come to the table ready to give up your program," Tillerson continued. "They have too much invested in it. And the president is very realistic about that as well."

While Trump seeks to defend the U.S. and its allies from the North's threats, he has also encouraged diplomatic efforts to resolve the impasse, the secretary claimed.

The U.S. leader has publicly taken an aggressive stance toward Pyongyang by threatening to "totally destroy" the regime if necessary and trading personal insults with North Korean leader Kim Jong-un.

In October, he appeared to undercut his top diplomat, saying Tillerson was "wasting his time trying to negotiate with Little Rocket Man," Trump's derogatory nickname for Kim.

Earlier in the forum, Tillerson made clear, however, that North Korea has to come to the table "with a view that they do want to make a different choice" on its weapons programs. 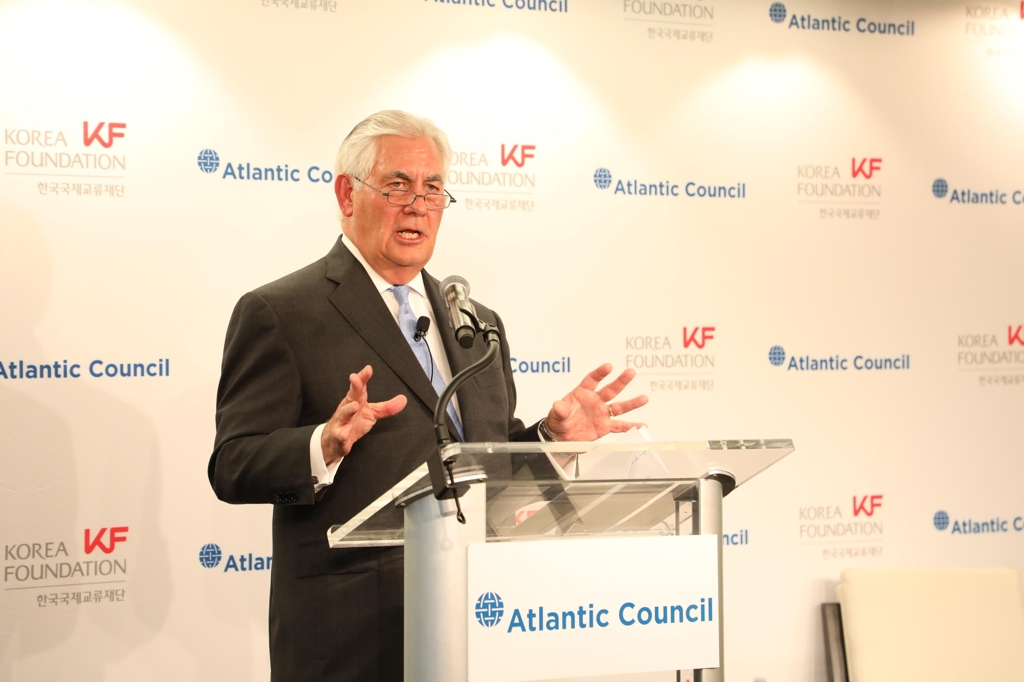 Pyongyang has said at every opportunity that its weapons of mass destruction are nonnegotiable. It claims they are a deterrent against U.S. hostility toward the regime.

"We can talk about whether it's going to be a square table or a round table if that's what you're excited about," the diplomat said. "But can we at least sit down and see each other face to face? And then we can begin to lay out a map, a road map of what we might be willing to work towards."

North Korea has claimed its new missile is capable of delivering a nuclear weapon to all parts of the U.S. mainland. The launch broke a 75-day pause in the regime's weapons testing, which had raised hopes of an opening for talks between Washington and Pyongyang.

"It's going to be tough to talk if in the middle of our talks, you decide to test another device," Tillerson said. "If we're going to talk, we have to have a period of quiet ... or it's going to be very difficult to have productive discussions."

He said he will continue diplomatic efforts with North Korea "until the first bomb drops" and is confident he will be successful. But U.S. Defense Secretary Jim Mattis will also be successful if it becomes "his turn."

"We simply cannot accept a nuclear-armed North Korea," Tillerson stressed, noting that Trump has been putting more pressure on China to cut off its oil supply to the North even as Beijing has backed and implemented recent U.N. sanctions against its wayward ally.

"We have had conversations (with the Chinese) that if something happened, and we had to go across a line, we have given the Chinese assurances we would go back and retreat back to the south of the 38th parallel when whatever the conditions that caused that to happen," Tillerson said. "That is our commitment we made to them."

The U.S.' only objective is to denuclearize the Korean Peninsula, he added, "And out of that and out of these discussions, perhaps we can create a different future for the North Korean people because the one they have right now is pretty dismal."