"(Kim) solemnly declared that the development of new strategic weapon systems including A-bomb, H-bomb and ICBM Hwasong-15 ... completing the state nuclear force serve as a great historic victory of our party and people of the country achieved by the death-defying struggle at the cost of high price," Kim was quoted by the Korean Central News Agency (KCNA) as saying in his conclusion at the 8th Conference of Munitions Industry.

The two-day conference closed on Tuesday in Pyongyang, according to the KCNA.

Kim put forward the goal of advancing the North to become "the world's strongest nuclear power and military power," during his speech. He also set forth long-term objectives and strategic tasks "to be fulfilled to develop the defense industry ... into the ultra-modern self-supporting defense industry in the 21st century," the KCNA reported.

"He expressed belief that the scientists of the national defense industry and workers of munitions would bolster up the nuclear force in quality and quantity, manufacture more latest weapons and equipment of Korean style and thus fulfill their honorable mission and duty," the KCNA report continued.

The defense industry "will continue to develop and we will win victory in the showdown with the imperialists and the U.S." he also said, pledging continuing efforts for military buildup.

During the last day of the conference, Kim presented commendations to scientists who developed the Hwasong-15 intercontinental ballistic missile and held a banquet to celebrate the launch of the missile on Nov. 29, according to the KCNA. 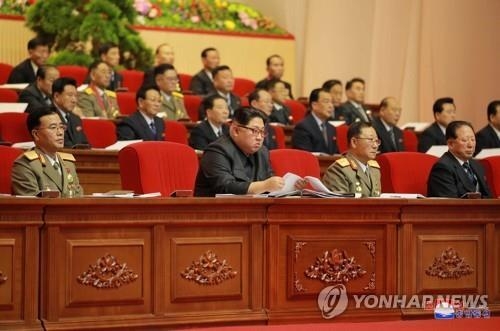