(ATTN: UPDATES throughout with missile training)

It was the first live-fire Stinger missile drill by the country's newborn Apache unit, conducted at the Daecheon range off the west coast of the peninsula earlier in the day.

The two Apaches were mobilized, with two others on standby.

They first detected the Outlaw G2 target vehicles with their fire control radar, and the pilots discerned them with their naked eye before shooting the missiles, equipped with an infrared homing system, at the Outlaw G2 drones flying over the sea 2.5 km far away, according to the Army.

The test was "successful," the Army announced.

It added the Stinger missile is a powerful weapon to destroy the enemy's aircraft and drones infiltrating the South at relatively low altitudes. 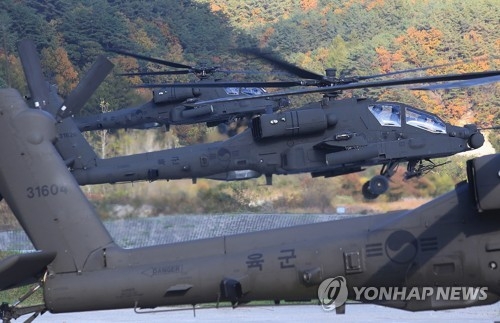 An Apache helicopter can carry up to four Stinger missiles with a maximum range of 6 km.

Last month, the Army held an Apache Hellfire air-to-surface missile exercise in addition to a number of rocket and machine gun live-fire drills.

The training of pilots and maintenance crew has been completed, and the units will be put into operation by early next year, the Army said.

"The Apache battalions are the core combat element of the Army's aviation force and can strongly retaliate against any type of enemy provocation," said Lt. Col. Kim Sang-joon, who commanded the firing training.