Outstanding household loans from lenders came to 762.7 trillion won (US$698.4 billion) as of the end of November, according to the data by the Bank of Korea (BOK). This marks a 6.6 trillion-won increase from a month earlier, down from a 6.9 trillion-won rise in October

The BOK said other bank loans, including lending through an overdraft line of credit, gained a record 3.7 trillion won on-month to 194.5 trillion won due to a rise in demand for loans from two Internet-only banks.

The South Korean government has intensified measures to tighten mortgage rules for owners of multiple homes as part of efforts to ensure mounting household debt does not hurt the nation's economy.

In line with the move, the central bank raised the key rate by a quarter percentage point to 1.5 percent on Nov. 30 for the first time in nearly 6 1/2 years.

"The market had already priced the rate hike for months. Banks raised loan rates in advance," said a BOK official. "The BOK's rate-hike decision will hardly affect the pace of household lending in the coming months." 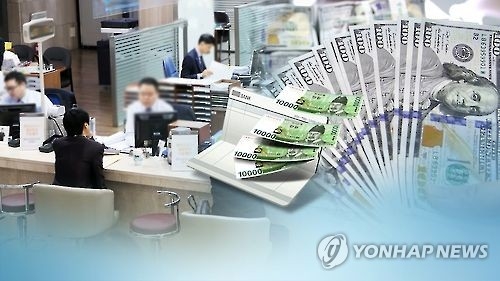 Growth pace of household lending slows down in Nov.

Growth pace of household lending slows down in Nov.