SEOUL, Dec. 13 (Yonhap) -- The number of Chinese tourists to South Korea is expected to halve in 2017 from last year due to China's economic retaliation over South Korea's deployment of a U.S. missile defense system, government data showed Wednesday.

China has retaliated economically against South Korea since early this year after Seoul deployed the U.S. Terminal High Altitude Area Defense (THAAD) missile system, which Beijing sees as a security threat. Seoul and Beijing agreed in November to bring the frayed ties back on the normal track.

The number of Chinese tourists is predicted to fall by 4 million this year from 8,068,000 last year, according to the estimation by the Bank of Korea.

The reduction will lead to 5 trillion won (US$4.5 billion) in lost revenues, the central bank said.

The number of Chinese visitors declined to 2.38 million between March and October this year from 5.94 million a year earlier.

The Bank of Korea has said the Chinese economic retaliation will likely reduce South Korea's economic growth rate by 0.4 percentage point this year. 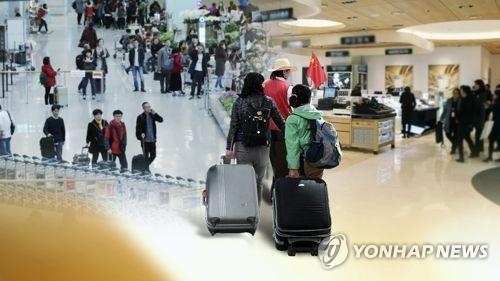 Number of Chinese tourists to S. Korea to halve this year over missile row: BOK

Number of Chinese tourists to S. Korea to halve this year over missile row: BOK