SEOUL, Dec. 13 (Yonhap) -- A parliamentary committee failed Wednesday to pass two special bills on probing a bloody military crackdown on the 1980 pro-democracy movement in Gwangju and a series of deadly army accidents over the past decades.

The failure came as the main opposition Liberty Korea Party (LKP) insisted that enacting new laws -- rather than revising existing ones -- must first go through due procedures, such as holding public hearings in accordance with the law governing the legislation process.

Ruling party members, however, claimed that many bills have so far cruised through the committee without public hearings.

One of the bills aims to verify the truth behind the 1980 uprising that was quashed by the military-backed Chun Doo-hwan government of the time. The brutal crackdown left hundreds of citizens dead or injured.

The other bill is designed to reinvestigate a slew of suspicious military deaths. Bereaved families and civic activists have questioned the causes of the fatalities, and some question the credibility of the military probes into the incidents. 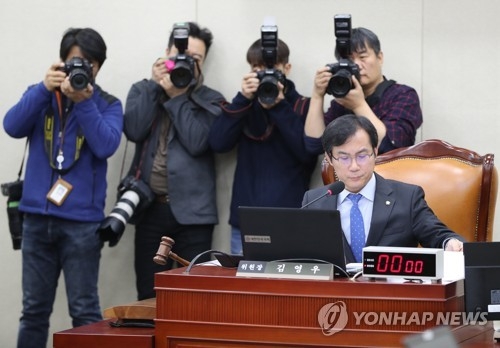