SEOUL, Dec. 13 (Yonhap) -- U.S. Secretary of State Rex Tillerson's remarks about his willingness to talk with North Korea "without preconditions" might signal a marked change in Washington's posture in dealing with Pyongyang and raise the "window of opportunity" for easing tensions surrounding its nuclear and missile programs, experts said Wednesday.

It still remains to be seen whether his remarks are the official stance of the Donald Trump administration and also how the North will respond, they said. Some voiced concerns that things could get much worse than now should Pyongyang go ahead with its provocative behavior. 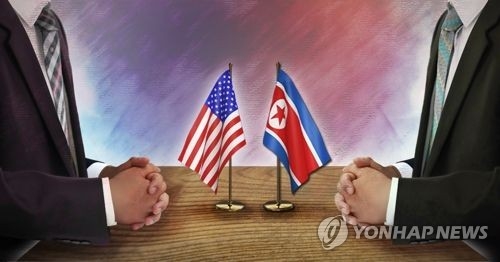 On Tuesday (local time), Tillerson said in a forum co-hosted by the Korea Foundation and the Atlantic Council think tank in Washington, "We're ready to talk whenever North Korea is ready to talk, and we're willing to have a first meeting without preconditions."

His remarks are seen as different from Washington's long-held stance that it will pursue maximum pressure and engagement to force the North to abandon its nuclear weapons program, demanding North show sincere attitude in its denuclearization efforts as a precondition for talks with Pyongyang.

The North has demanded as its own precondition for talks that the U.S. drop its hostile policy toward it and the North be recognized as a nuclear weapons state, a demand that the U.S. has said it will not accept.

"It surely is out of line with the U.S.' previous posture and seems to be moving toward the North's demand to some extent," said James Kim, a researcher at the Asan Institute for Policy Studies. "I think it is unusual to hear that."

The top U.S. diplomat's remarks came amid tensions that flared up anew after the North test-fired what it claims to be a new type of intercontinental ballistic missile capable of hitting all parts of the United States on Nov. 29 and declared that the launch marks the completion of its nuclear armament.

This threw cold water on cautious expectations that the U.S. and North Korea could have direct contact, fueled by a 75-day lull in which the North had not conducted any major provocations.

Apparently rekindling speculation that the reclusive state might be tilting toward talks with the outside world, Jeffrey Feltman, the U.N.'s undersecretary general for political affairs, made a rare trip to North Korea last week.

After his four-day visit, the North's state-run media said that Pyongyang will communicate "through visits at different level on a regular basis in the future."

Attention is also being placed on whether there will be contact between the U.S. and North Korea on the sidelines of an international meeting on security to be held in Chiang Mai later this week. 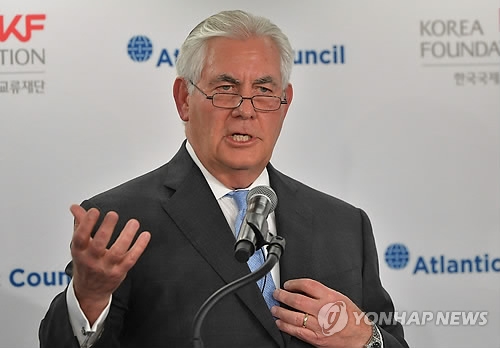 The meeting will be joined by Joseph Yun, U.S. special representative for North Korea policy, and four North Korean officials, including Choe Jin, vice chief of an institute on peace and disarmament under the foreign ministry.

Experts see it is noteworthy that Tillerson made such remarks on the North, but it is too early to say whether talks without preconditions are the official policy direction that the Trump administration will take going forward.

Yang Moo-jin, a professor at the University of North Korean Studies, said that there should be "follow-up" gestures to back up the seriousness of Tillerson's remarks. He said that there have been cases in which his push for talks were rebuffed by President Donald Trump.

"I think the possibility of talks appears to be growing. The North's declaration that it has completed its nuclear armament, in particular, could be understood as a way to signal that Pyongyang might be pursuing turning things around (through talks)," he said.

"The key is whether Tillerson's remarks reflect what Trump wants or are just his personal views," he said. "What we have to see is whether the U.S. will come out with any follow-up action such as an actual proposal of talks or any efforts to activate its purported New York communication channels with the North."

Yang still worried that there might be too much deep mutual mistrust and animosity exacerbated by their exchange of bellicose rhetoric up until recently to start direct contact. He said that countries such as China and Russia might have to create a mood for talks.

Experts agreed that Tillerson's "talks-without-conditions" remarks have sent a message to the North that it is ready to talk. The ball is now in the court of the North, and it remains to be seen whether and how the country will respond.

"Tillerson seems to have sent a message that all should boil down to direct talks between the U.S. and North Korea," said Park Jeong-jin, vice director of the Institute for Far Eastern Studies. "I think this will have a positive impact in inducing the North to sit down at the negotiating table. One thing is for sure. It generated a window of opportunity for talks."

Things, however, could get worse should the North rebuff it and respond with more provocations that could make it harder for Washington to wiggle around in its future policy and send the tensions spiraling out of control, he said.

"If it fails to resume talks even after making such remarks and if North Korea chooses to go 'my way' and doubles down on its pursuit of nuclear and missile programs, it would reduce the choices that Washington can choose from," Park said. "It could end up forcing the U.S. to take a much tougher stance on the North, possibly making things worse from now."