BEIJING, Dec. 13 (Yonhap) -- South Korean President Moon Jae-in vowed efforts to normalize his country's relationship with China on Wednesday, while calling on the countries to further enhance their bilateral cooperation on political and security issues.

"Over the past 25 years, the South Korea-China relations have achieved an extraordinary development in the economic sector, but their relations in the political and security sectors fell short of such development," the president said while meeting with some 400 South Korean residents here in Beijing. Moon arrived in China earlier in the day on a four-day state visit that will also take him to the southwestern city of Chongqing. He is set to hold a bilateral summit with Chinese President Xi Jinping on Thursday. 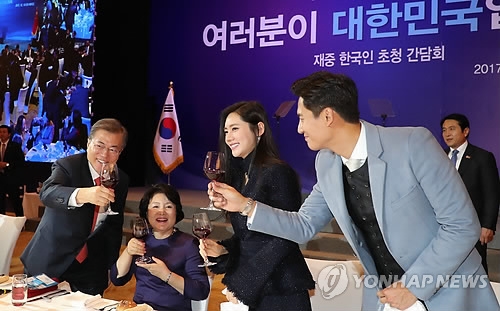 Moon's first trip to China comes after the countries agreed to normalize their ties, estranged by the deployment of the THAAD U.S. missile defense system in South Korea.

Many believe the countries have yet to completely put the past behind.

"How much you must have suffered due to the aftermath of the THAAD issue. That is why I have been taking enormous efforts to repair the South Korea-China relations since coming into office," the president said.

Moon expressed hope his trip will mark a new start for the two countries.

"As soil hardens after rain, I wish my state visit will help restore trust between the two countries and open a new era for the South Korea-China relationship," he said.

The Moon-Xi meeting will be the third of its kind since the South Korean president took office in May.

Moon will head to Chongqing on Friday for talks with Chinese officials there and a visit to a local plant of the South Korean automaker Hyundai Motor Co., according to his office Cheong Wa Dae.

While there, he will also visit the former office of South Korea's provisional government that operated in China during Japan's 1910-45 colonial rule of Korea.