BEIJING, Dec. 14 (Yonhap) -- The leaders of South Korea and China were set to hold a bilateral summit here Thursday as their countries are seeking to find ways to peacefully end North Korea's nuclear ambitions and also normalize their ties estranged by the deployment of a U.S. missile defense system in South Korea.

The meeting between President Moon Jae-in and his Chinese counterpart Xi Jinping will follow an official reception, according to Moon's presidential office Cheong Wa Dae.

The South Korean leader arrived here Wednesday on a state visit. The four-day trip is also scheduled to take him to the southwestern city of Chongqing, home to many South Korean businesses and the former office of South Korea's provisional government in exile during the 1910-45 Japanese colonial rule of Korea.

The Moon-Xi meeting will mark the third of its kind as the two earlier met on the sidelines of the Group of 20 summit, held in Germany in July, and the Asia-Pacific Economic Cooperation forum in Danang, Vietnam last month. 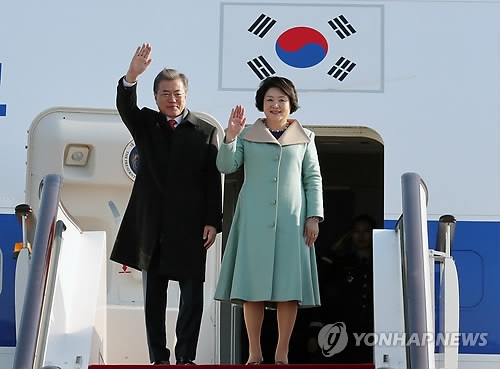 North Korea will likely top the agenda of the meeting again as it follows the North's launch of an intercontinental ballistic missile on Nov. 29, which marked the resumption of its provocations after a 75-day hiatus.

Pyongyang has staged 11 missile tests since Moon took office in May. It also conducted its sixth and most powerful nuclear test so far on Sept. 3.

"The two leaders are scheduled to hold in-depth discussions on ways to peacefully resolve the North Korean nuclear issue and establish peace on the Korean Peninsula," Nam Gwan-pyo, a deputy director of the presidential National Security Office, said earlier.

Seoul and its allies have long been asking China, the North's largest communist ally, to help bring the reclusive regime to the dialogue table.

Beijing insists it has done more than any other country to help end the North's nuclear ambitions, but many believe the country can do more as it accounts for nearly all of North Korea's annual trade, as well as its oil imports.

The upcoming talks, however, will also focus on ways to normalize the countries' bilateral ties, though they have already agreed to do so in a joint statement issued Oct. 31.

The Seoul-Beijing relations quickly soured after South Korea decided to host the THAAD missile defense system in the wake of a series of North Korean provocations.

China reacted angrily with apparent economic retaliations that included import bans on a range of South Korean products. Many believe the retaliatory measures are still in place. 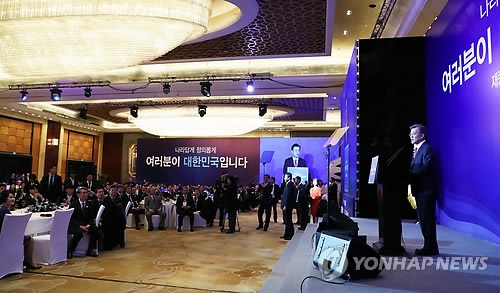 While meeting with a group of South Korean residents and business leaders here Wednesday, the South Korean president stressed the need for the countries to start anew.

"I wish my state visit will help restore trust between the two countries and open a new era for the South Korea-China relationship," Moon has said.

Signaling a possible thaw in Seoul-Beijing relations, the president said he and his Chinese counterpart were expected to sign an agreement Thursday on the start of negotiations to expand the countries' bilateral free trade agreement (FTA) to the service and financial sectors.

The South Korea-China FTA went into effect in December 2015, but currently deals only with products.

Following the bilateral summit, Moon will attend a state dinner to be hosted by Xi.

He will deliver a special speech at Peking University before heading to Chongqing on Friday.

He will return home on Saturday.