SEOUL, Dec. 13 (Yonhap) -- Rival parties tacitly agreed Wednesday not to hold a parliamentary vote on a motion for the arrest of an opposition lawmaker in a high-profile corruption probe, giving a free hand to the prosecution.

The floor leaders of the ruling Democratic Party, main opposition Liberty Korea Party (LKP) and People's Party decided to receive a report on the motion for the arrest of LKP Rep. Choi Kyung-hwan at a National Assembly plenary meeting on Dec. 22. But they did not call a vote.

To arrest a lawmaker while the legislature is in session, the prosecution needs to secure parliamentary approval. The current extraordinary legislative session ends on Dec. 23, and after that date the prosecution is free to execute the arrest warrant should it be issued by a local court.

Choi, close to ousted President Park Geun-hye, is under investigation over allegations that he took 100 million won (US$91,570) from the National Intelligence Service in 2014, when he served as finance minister with a crucial say in the spy agency's budget.

"(The rival parties' agreement) means there will be no procedure the National Assembly will undertake to pass the motion," Park Hong-geun, vice floor leader of the ruling party, told reporters. "Thus, it is up to the prosecution how it will deal with his case starting Dec. 24." 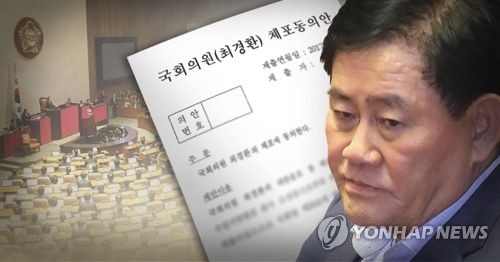