SEOUL, Dec. 13 (Yonhap) -- The chief of South Korea's ruling Democratic Party has called for Russia's cooperation in enforcing international sanctions against North Korea, amid the escalating nuclear standoff with the provocative state, her office said Wednesday.

Choo Mi-ae made the remarks during her talks with Vyacheslav Viktorovich Volodin, the chairman of the State Duma, the lower house of Russia's parliament. Choo, the chairwoman of the South Korea-Russia Interparliamentary Council, is in Moscow on an eight-day trip.

"When South Korea and Russia form close relations, this will have a positive effect on the resolution of the North Korean nuclear issue and peace on the Korean Peninsula," Choo was quoted by her office as saying.

"Furthermore, from Russia's standpoint, this will have the effect of sending a warning to Japan, which is seeking to strengthen its military for the purpose of handling the North's nuclear (threats)," she added.

Choo then voiced hopes for the early start of earnest negotiations on a free trade agreement between South Korea and the Russia-led Eurasian Economic Union, a customs union consisting of Russia, Armenia, Belarus, Kazakhstan and Kyrgyzstan.

"Economic cooperation between the two countries carries a very great meaning with regards to the denuclearization of the Korean Peninsula and the establishment of peace there," she said.

"I urge you to muster efforts for cooperation in applying strong sanctions against the North, expanding economic cooperation to promote stability in Northeast Asia and leading the North to come onto a path towards dialogue and openness," she added.

She also called for cooperation in allowing Russian athletes to compete in the 2018 PyeongChang Winter Olympics as neutral individuals, despite a ban on Russia competing over its state-sponsored doping.

Her trip to Russia is part of her initiative to support the government's efforts to strengthen diplomatic and economic ties with major countries. Choo recently visited the U.S. and China and plans to visit Japan early next year. 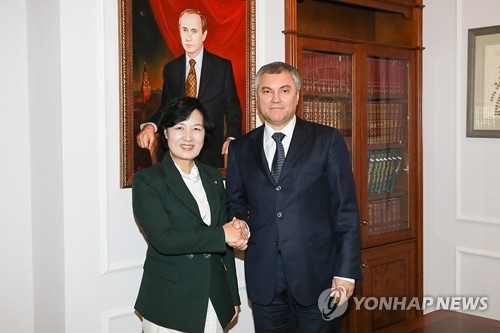