"North Korea should stop any further provocations and come out for talks without conditions," Cho was quoted by the ministry as having told a group of Seoul-based foreign ambassadors.

The meeting brought together about 30 ambassadors, including those from the United States, China, Japan and Russia, as well as other Seoul-based envoys who also represent their countries in North Korea. The forum was arranged to inform the ambassadors of South Korea's policy direction toward North Korea.

The unification minister said South Korea is expecting the North's participation in the 2018 PyeongChang Winter Olympics in February, illustrating the country's vision to produce a chance for talks with the North out of the international sports event.

South Korea is seeking to solve the North Korean nuclear issue ultimately through peaceful and diplomatic means, the minister said. In that vein, South Korea is pushing to restore communication lines with North Korea and increase cooperation between the two Koreas, according to the minister. 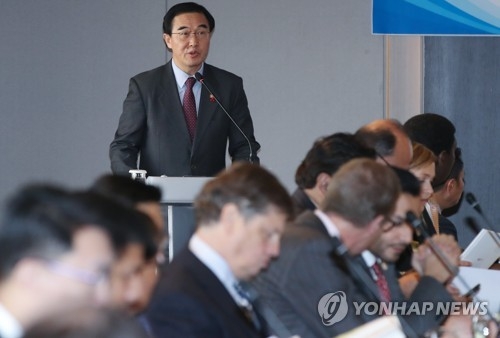