The Kia Tigers left-hander was one of 10 recipients of the Golden Glove in the Korea Baseball Organization (KBO), as he capped off the most memorable season of his 11-year career. Yang won a whopping 323 out of 357 votes cast by baseball writers, photojournalists and broadcasters.

Yang won the regular season MVP award last month, after tying for the KBO lead with a career-high 20 wins and ranking fifth with a 3.44 ERA. And in late October, Yang was voted the MVP of the Korean Series, the KBO's championship final, for helping the Tigers beat the Doosan Bears in five games for their first title since 2009. Yang threw a complete game shutout in Game 2 and pitched a scoreless ninth inning for a save in the clinching Game 5.

The 29-year-old is the first KBO player to sweep both MVP awards and a Golden Glove in one season. This was also Yang's first career Golden Glove. 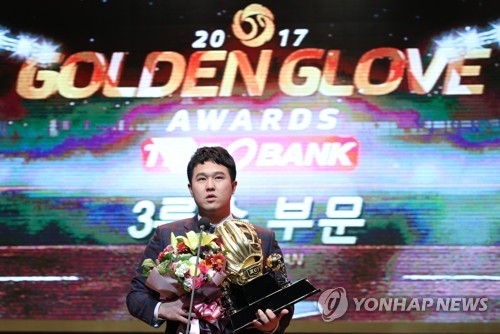 Yang's teammate, Hector Noesi, was the only other pitcher to even reach double figures in votes with 12. Noesi also won 20 games but had a slightly worse ERA than Yang at 3.48.

The nine other awards went to eight position players and one designated hitter (DH). Despite the name's connotation, Golden Gloves are usually presented to players who put up the best offensive and pitching numbers, instead of the best defensive players. League leaders in major offensive and pitching categories all earned automatic nominations.

Starting this year, the KBO included defensive innings played among the qualifications, which expanded the pool of nominees and brought defensive contributions into consideration.

For pitchers, anyone who threw the minimum innings for the ERA title, 144, was up for the Golden Glove. Also, a pitcher who met one of the following criteria -- 10 or more wins, 30 or more saves and 30 or more holds -- was nominated as well. 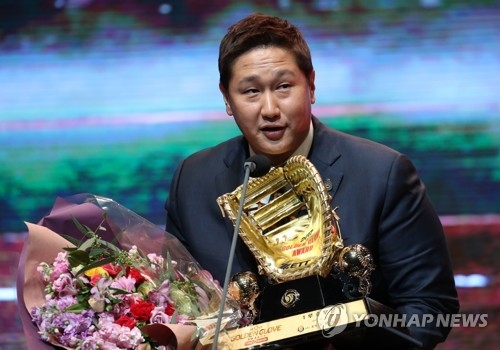 SK Wyverns third baseman Choi Jeong, the runner-up to Yang in the regular season MVP voting, picked up his fifth Golden Glove at a hot corner in a landslide. Choi swept up 326 votes, with the Tigers' Lee Bum-ho a distant second with just 19 votes.

Choi was the regular season home run king with a career-high 46 long balls and finished fifth in RBI with 113.

Lee Dae-ho of the Lotte Giants grabbed his fifth Golden Glove in his first season back in the KBO after five years split in Japan and the United States. The former Seattle Mariners first baseman earned 154 votes to beat Wilin Rosario of the Hanwha Eagles by 36 votes. 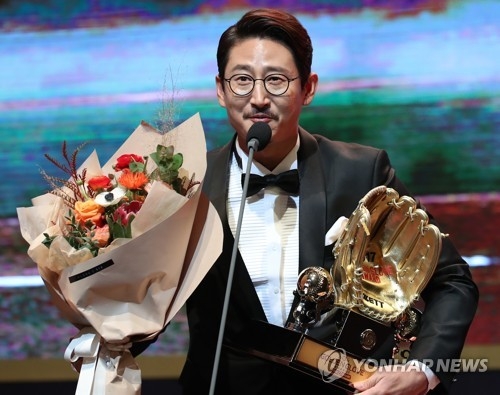 This was the closest battle in the infield, with An beating Park Min-woo of the NC Dinos by 140 to 134 in votes.

An led all second basemen with career highs of 21 home runs and 93 RBIs.

Park finished third in the league with a .363 batting average but only played in 106 games, 26 games fewer than An, and didn't put up quite the power numbers.

An's double play partner on the Tigers, shortstop Kim Sun-bin, claimed his first Golden Glove. Kim, the shortest everyday player in the KBO at 165 centimeters, was the batting champion with a .370 average. He garnered 253 votes.

Nexen Heroes' Kim Ha-seong, who led all shortstops with 23 home runs and 114 RBIs while batting a career-high .302, earned just 86 votes to finish second.

The three outfield winners were: Son A-seop of the Giants and Choi Hyoung-woo and Roger Bernadina of the Tigers.

Son topped all outfielders with 224 votes, followed by Choi with 215 and Bernadina with 190.

Choi won his second straight Golden Glove and his fifth overall. In his first season with the Tigers, Choi ranked second in the KBO with 120 RBIs and sixth with a .342 batting average. Choi also hit 26 home runs for his fourth straight year with at least 20 homers and 100 RBIs.

In his first KBO season, Bernadina had 27 homers, 111 RBIs and 32 steals, and was the only foreign player to hit for the cycle this year.

Kang Min-ho of the Samsung Lions won his fifth Golden Glove as catcher. Playing for the Giants in 2017, Kang led all backstops with a .280 batting average, 22 home runs, 68 RBIs and 22 doubles. Kang signed a free agent deal with the Lions last month, and is the seventh player to win a Golden Glove after switching teams via free agency in the same offseason.

Kang picked up 211 votes, while Yang Eui-ji of the Doosan Bears, the winner of the past three Golden Gloves, was a distant second with 68. 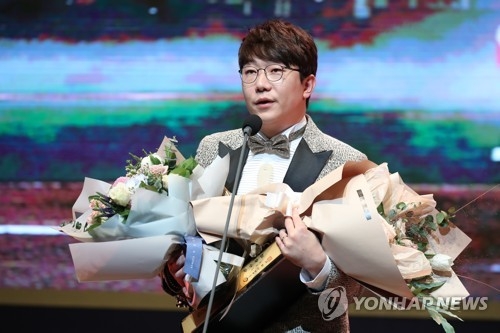 With 184 votes, Park easily beat out Samsung Lions' Lee Seung-yuop, the KBO's career home run leader who earned 79 votes. Lee, who retired after the 2017 season, was going after his 11th Golden Glove, after batting .280 with 24 homers and 87 RBIs.