According to the data compiled by the industry tracker IHS Markit, the global market for the OLED displays for smartphones came to US$4.7 billion in the third quarter, rising sharply from $3.6 billion posted a year earlier.

OLED displays are widely applied on major smartphones, including Samsung Electronics Co.'s Galaxy Note 8 and Apple Inc.'s iPhone X, due to their slim and flexible nature, which can be utilized for various designs.

Industry watchers said the growth is anticipated to continue down the road as Chinese brands are also planning to apply OLED displays on their devices.

South Korea's Samsung Display Co. stands as the major player in the market.

For all of the small and medium-sized displays, the combined size of the market came to $14 billion, up 20.4 percent from a year earlier.

The segment covers displays that are 9 inches and smaller, and products used mostly for smartphones, tablet PCs and wearable devices.

Samsung has maintained the No. 1 spot in the area at 34.1 percent, trailed by Japan Display Inc. with 13.6 percent and LG Display Co. with 11.7 percent. Japan-based Sharp Corp. accounted for 8.2 percent. 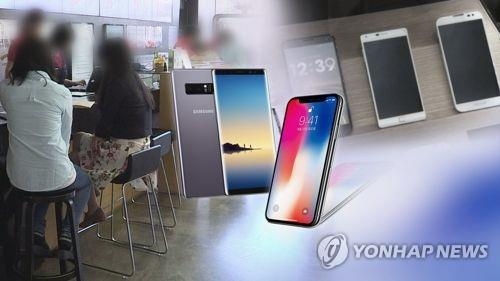 Global market for smartphone OLEDs up 30 pct in Q3

Global market for smartphone OLEDs up 30 pct in Q3