SEOUL, Dec. 14 (Yonhap) -- Samsung Electronics Co. is forecast to lose ground next year in the smartphone segment, an industry tracker said Thursday, apparently due to the rise of Chinese manufacturers.

Strategy Analytics said Samsung Electronics is expected to post a market share of 19.2 percent in the global smartphone industry in 2018 by shipping 315 million units, down from 20.5 percent estimated for this year.

The weaker outlook comes as U.S. rival Apple Inc. is expected to expand its presence in the high-end segment, while Chinese companies are quickly making inroads to the industry with budget devices, experts said.

It will mark the first time that Samsung will post a decline in smartphone shipments on-year, excluding 2016, when the company suspended the production of the Galaxy Note 7 over safety issues.

Apple, on the other hand, is expected to take up 14.3 percent of the market in 2018 by shipping 234 million units, up from 14 percent posted this year.

China-based Huawei Technologies Co. and Oppo Electronics Corp. are also set to expand their shares to account for 10 percent and 7.8 percent, respectively, next year, the data also showed.

Industry watchers said Samsung Electronics must prepare to cope with the rise of Chinese smartphone makers, as they are also starting to set their eyes on the premium segment as well.

"While the iOS-powered smartphones do not have competitors, Samsung will face tougher challenges in the Android segment," said Park Nam-gyoo, a professor of business at Seoul National University. 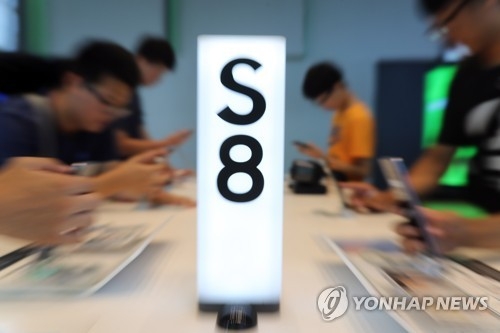