Son scored the second goal in the Spurs' 2-0 win over Brighton & Hove Albion in their English Premier League (EPL) match at Wembley Stadium in London on Wednesday (local time). It was Son's fifth EPL goal of the 2017-18 season. He also has three goals in the UEFA Champions League (EPL).

Son has now scored in four straight matches for Spurs, starting from his goal against Watford on Dec. 2. He also found the net in the UEFA Champions League action against Apoel FC on Dec. 6 and EPL match against Stoke City on Saturday.

Son started as a left winger in the Spurs' 4-2-3-1 system. He took a shot just three minutes after kick off and had another chance to score in the 24 minute, but both attempts missed the target. Spurs, however, took a 1-0 lead with Serge Aurier's goal in the 40th.

Mauricio Pochettino's side saw Erik Lamela's strike in the 52nd and Harry Kane's free kick rattling the post in the 84th, but it was Son who sealed the victory for the London club three minutes later. The 25-year-old redirected Christian Eriksen's free kick from the right wing with a back header and found the net for a 2-0 lead.

This was Son's first goal with a header since he joined Spurs from German outfit Bayer Leverkusen in August 2015.

Son, however, couldn't play the match full time as he was replaced by Ben Davies in the 90th.

With the latest victory, Spurs moved up to fourth place in the 20-team league. Pochettino's team will next face undefeated league leaders Manchester City on the road Saturday. 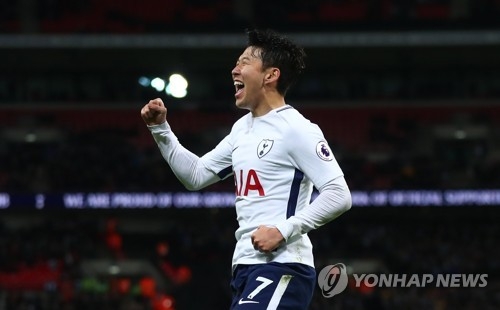