"It is verified that the closure was decided by the president's unilateral verbal order without discussions and consultations at the official decision-making level," the report showed.

It also said that the closure is a decision that transcends law, adding that even a political decision amid a security crisis should be made within the boundary of law and under legal procedures. 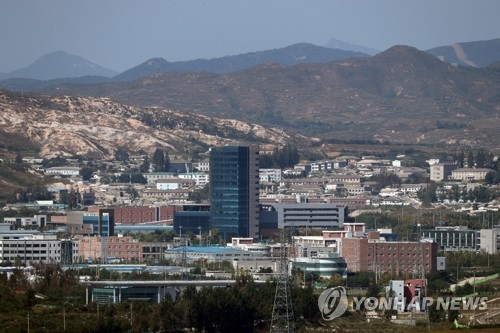 At that time, the ministry said that the decision was aimed at preventing money generated by the factory park from bankrolling North Korea's nuclear and missile development.

The report failed to clear up speculation that Choi Soon-sil, the now-jailed long-time friend of Park, might have been behind the closure. The former government dismissed the allegations.

Choi was at the center of the corruption scandal that led to Park's impeachment in December 2016 and ouster earlier this year.

The report is likely to rekindle a row over under what conditions the operation of the Kaesong complex can be resumed.

The liberal Moon Jae-in government is seeking better inter-Korean ties and engagement with Pyongyang though it now focuses on employing sanctions and pressure on the North over its nuclear programs.

Seoul said the resumption of the industrial park would hinge on progress in the resolution of North Korea's nuclear and missile problems.

The committee, meanwhile, added that intelligence on North Korea should not be politically used, saying that the government broke the practice of not revealing details about defections by North Koreans.

Last year, the ministry announced that 12 North Korean female workers at a Chinese restaurant en masse and Thae Yong-ho, a former diplomat stationed in the North's embassy in Britain, defected to the South.

"The ministry passively made the announcement at the request of Seoul's spy agency. It is identified that the ministry was not even aware of details about intelligence well," Im Seong-taek, a lawyer and panel member, told a briefing.

The panel's review came as the Moon government is seeking to set a North Korea policy that can survive through succeeding administrations regardless of their ideology. It said that South Korea's inter-Korean policy should be made based on public consensus and law and in a consistent manner.