SEOUL, Dec. 28 (Yonhap) -- Koreans' three favorite advertising models for 2017 were found to be Gong Yoo, Song Joong-ki and Seol Hyun, according to a recent survey on consumer behavior.

The result showed that the actor of the mega-hit drama "Guardian: The Lonely and Great God" turned out to be the most popular ad model, with 6.7 percent, closely followed by Song Joong-ki of "Descendants of the Sun" with 6.5 percent. Singer and actress Seol Hyun came in third with 5.6 percent and Jeon Ji-hyun, the heroine of "My Love from the Star," ranked fourth with 4.7 percent. The fifth and sixth spots were taken by actor Park Bo-gum (4.6 percent) and singer and actor Suzi (4.2 percent), respectively.

The most memorable ad of this year was found to be the instant coffee brand "Kanu" embraced by Gong Yoo. Park Bo-gum's Domino Pizza ad came in second. 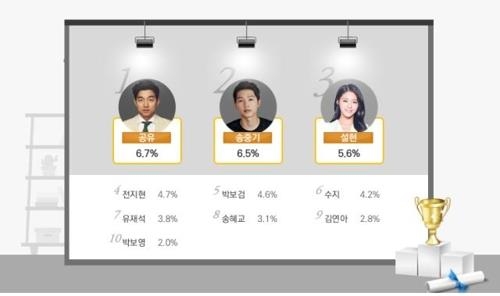 Separately, the company also surveyed how much the respondents would view the broadcasting of the 2018 PyeongChang Winter Olympics. Fifty-four percent said they would "actively" watch the Winter Games, among which 14 percent said they would watch most of the games. Men viewers in their 40s and 50s were found to be most active group to tune in to the Olympics broadcasting.

By gender, 57 percent of men said they would watch TV more than usual during the Olympics while 44 percent of women said so.

The survey also showed that the respondents who said they would watch the games actively prefer a name brand and are more likely to purchase products featured on TV advertisements. They also have high demands for beer, outdoor outfits and male cosmetic products, KOBACO said. 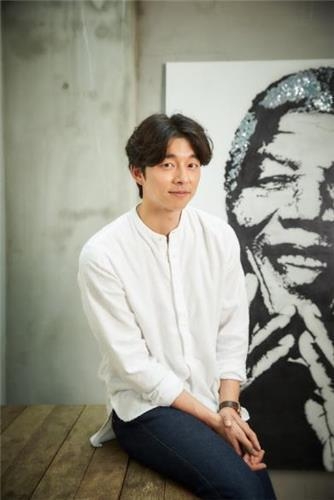 Actor Gong Yoo found to be most favored ad model in 2017: survey

Actor Gong Yoo found to be most favored ad model in 2017: survey