SEOUL, Dec. 28 (Yonhap) -- The government said Thursday it is banning the use of anonymous virtual accounts in cryptocurrency transactions as part of efforts to curb virtual currency speculation.

Hong Nam-ki, minister of the Office for Government Policy Coordination, made the announcement after a meeting of vice ministers from related ministries, saying the government "can't let this abnormal situation of speculation go on any longer."

Such exchanges will also be banned from issuing virtual accounts to new clients, Hong said. 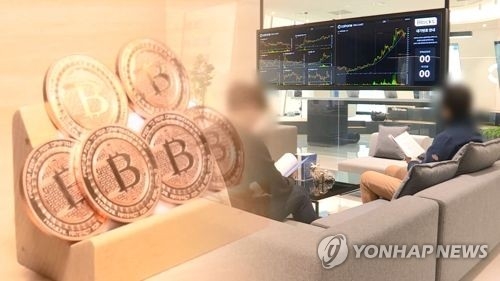 The Financial Intelligence Unit and the Financial Supervisory Service will carry out joint inspections to make sure that such real-name transactions will take root at an early date, the official said.

Cryptocurrencies, such as bitcoin and ethereum, have rapidly gained popularity in recent years. South Korea is home to one of the world's largest bitcoin exchanges, with about 1 million people estimated to own some of the best-known digital currency.

Amid signs of overheating in cryptocurrency speculation, the government has repeatedly warned of the risks associated with virtual currency trading, saying virtual currency is not a "legal tender whose value is guaranteed by the central bank" and therefore its prices could fluctuate by a great deal and result in enormous losses.

Despite such warnings, Hong said that speculation has shown little signs of abating, with values of many cryptocurrencies excessively higher at home than abroad, and some raising concern that money is flowing into cryptocurrency markets from productive sectors.

Hong said that the justice ministry even suggested shutting down cryptocurrency exchanges.

The minister said that the government will also strengthen requirements of local exchanges to prevent money-laundering, and toughen punishments for crimes related to virtual currency.

The government will also put restrictions on cryptocurrency advertisements, he said.