INJE, South Korea, Dec. 28 (Yonhap) -- An annual ice fishing festival will open on the frozen surface of Soyang Lake in Inje late next month to reinvigorate the economy of this remote mountainous town near the border with North Korea, organizers said Thursday.

The Inje Ice Fishing Festival will get under way in the town in Gangwon Province on Jan. 27 for a nine-day run under the slogan "Natural Theme Park." It will feature smelt catching, ice sledding, ice soccer, snow sculpture display, food tasting, hoop rolling and other winter activities. 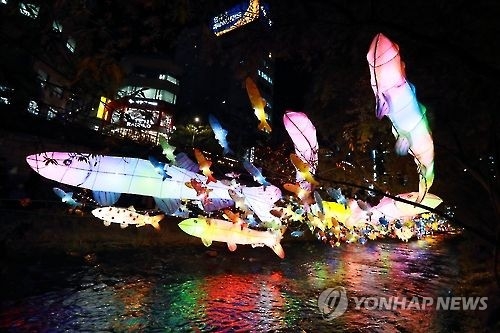 The annual festival was launched in 1998, but was not held in 2015 or 2016 due to a drought and warm weather, which resulted in no frozen river.

Since the festival's launch, the Hwacheon Sancheoneo Ice Festival and several other similar events have followed suit across the country, dwarfing the original version.

Launched in 2003, the Hwacheon Sancheoneo Ice Festival has grown to become one of the world's four major winter festivals, along with China's Ice and Snow World, Japan's Sapporo Snow Festival and Canada's Winter Carnival, organizers said.

Inje Ice Fishing Festival organizers said they will endeavor to recover the glory of the past, although it has for the moment been overtaken as the best winter festival in the country.

The festival was held in January this year, but the popular smelt fishing activity was not available due to unseasonably warm weather.

Cold weather, however, has been freezing Soyang Lake for the past week, with the average thickness of the ice reaching 18 centimeters as of Thursday, the organizers said. They hope the ice will be at least 25 centimeters thick on opening day. 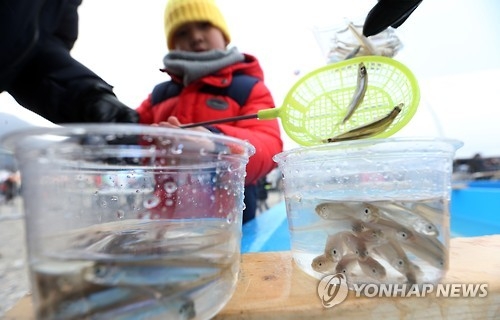 They said they will soon build a smelt fishing zone on 52,800 square meters of the frozen lake surface. Work has already begun for the construction of a snow sculpture display zone.

Organizers said they have prepared as many as 27 programs for the festival, including the opening ceremony, smelt catching, ice bobsledding, an ice maze and even an ice percussion performance, as well as other cultural and winter sporting activities.

Also being prepared are a cartoon cinema for children and a foot bathing facility for visiting families.

"All the preparations are being done on schedule, as we've seen continuous cold weather this winter," a spokesman for the Inje County Office said. "Our focus will be on safety," he added.