The country's public sector debt, known as D3, which includes the debt of the central government and state-funded firms, reached 1,036.6 trillion won (US$965 billion) as of end-2016, up 33 trillion won, or 3.3 percent from the previous year's 1,003.5 trillion won, according to the data compiled by the Ministry of Strategy and Finance.

It accounted for 64.2 percent of the country's GDP last year, down 0.1 percentage point from a year earlier.

General government debt (D2), which covers the central and provincial governments, and nonprofit public institutions, stood at 717.5 trillion won, up 41.3 trillion won from a year earlier. Its percentage of the GDP rose 0.6 percentage point to 43.8 percent last year.

In terms of D2, Asia's fourth-largest economy had the seventh most favorable number as measured in the debt-to-GDP ratio among 29 members of the Organization for Economic Cooperation and Development (OECD), the ministry said.

The ministry earlier said South Korea is expected to keep the ratio of national debt vis-a-vis the GDP under 39 percent for 2016 and 40 percent for 2017 on reduced Treasurys and a rise in tax revenue. 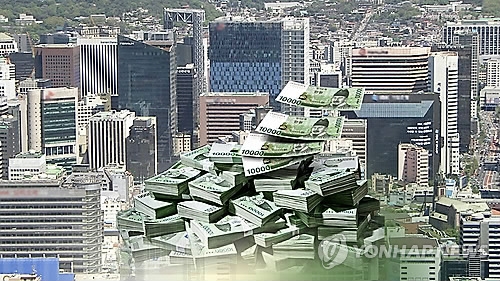