SEOUL, Dec. 28 (Yonhap) -- The 2018 PyeongChang Winter Olympics and Paralympics organizing committee said Thursday it will launch a fundraising campaign next month as part of its efforts to offset carbon emissions from the preparation and operation of the Feb. 9-25 sports event.

The committee asked participating athletes, spectators, countries, institutions and organizations to take part in the campaign, which will run from Monday through Feb. 25.

According to the committee, the amount of greenhouse gases to be emitted from the staging of the event is estimated at 1.59 million tons. Of the total, 31.3 percent, or 500,000 tons, is presumably attributable to transport and accommodations of athletes, spectators and other participants to the Games, it said.

The fundraising is done through advance online participation via the website, www.pyeongchang2018-carbonfund.com, and on-site participation.

Any country, institution or organization interested in the advance online participation can transfer money in five currencies -- the U.S. dollar, the yuan, the yen and the won -- to a bank account through the website from Jan. 1-21.

The on-site fundraising for individuals or groups will take place at the Olympic Park in Gangneung on South Korea's east coast from Jan. 23 through Feb. 25.

The organizing committee will use all of the donations to be raised to purchase internationally traded Certified Emission Reductions (CERs) to offset carbon emissions in association with the Olympics.

A CER is a carbon credit developed by carbon offset providers that is certified as being equivalent to one ton of carbon dioxide under the mechanism defined by the 1997 Kyoto Protocol to combat global warming. 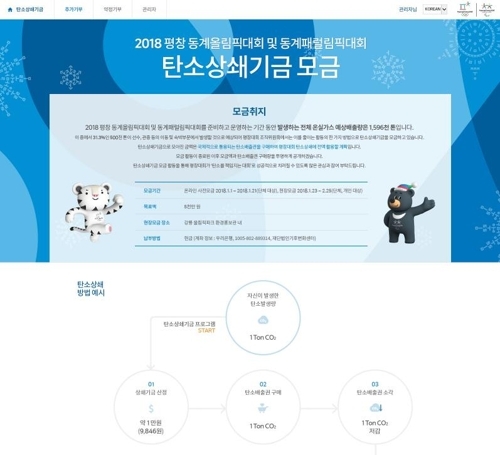 "The International Olympic Committee is also stressing the importance of reducing carbon emissions," Yeo Hyung-koo, the comittee's secretary general, said. "We hope that many people will actively participate in the campaign so as to make the PyeongChang Olympics a low carbon event."

The first ever Winter Olympics in South Korea are to be held in the host city of PyeongChang, Gangwon Province, and two nearby cities -- Gangneung and Jeongseon.