"The government will support with all its strength the path of science that you will walk," the president said in a meeting with some 200 students at his office Cheong Wa Dae. The participants included some 150 college students on a presidential science scholarship program.

"First of all, we will improve the environment for science and engineering research," Moon told the meeting, according to Cheong Wa Dae pool reports.

Such efforts will include mandatory social welfare programs, including health and unemployment insurance coverage, for all student researchers, the president noted. 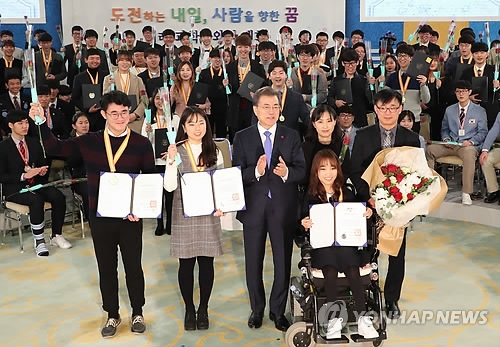 The government will also work to create new jobs for young researchers.

"Jobs for scientists and engineers are also the heartland of new jobs for the people," the president said.

"Also, we will expand government investment in basic research initiated by researchers themselves to 2.5 trillion won (US$2.33 billion) within my presidential term, which will be nearly double the current amount," he added. Moon's single five-year term ends in May 2022.

Moon also vowed efforts to improve the overall quality of work and life for scientists.

"We will create a basis for balance between life and work. Creative and innovative ideas may come to life under harmony between work and rest, concentration and communication," he said. "We will work to guarantee enough time for rest and communication with the world."