SEOUL, Dec. 28 (Yonhap) -- South Korea on Thursday began a two-day military exercise for the defense of Dokdo, a set of rocky islets in the East Sea to which Japan lays territorial claim.

"The Navy will conduct the regular Dokdo defense exercise aimed at preventing the infiltration of external forces into the South Korean territory in conjunction with a flotilla-level field exercise by the Navy's First Fleet," according to the Navy. The First Fleet is based in the East Sea.

The exercise is conducted twice a year and involves the Navy, Marine Corps, Coast Guard, Air Force and police. Navy destroyers, fighter jets and patrol aircraft are participating in the drill, the Navy said.

The exercise immediately drew an angry reaction from Japan, just as past exercises have done. Japan has long claimed the islets, which lie closer to South Korea than Japan, a fact that causes diplomatic tension with South Korea.

The Tokyo filed a protest with Seoul, saying the exercise is "unacceptable," Japan's Kyodo News reported, quoting a senior official.

The exercise started one day after a South Korean government panel concluded that the agreement with Japan that settled a wartime sex slavery dispute two years ago was defective.

A military official dismissed any political implication of the exercise's timing, saying it had been set up a month earlier. 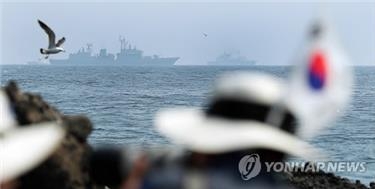