SEOUL, Dec. 28 (Yonhap) -- South Korea will draw up follow-up measures on a bilateral deal reached with Japan to address long running friction over its wartime sexual slavery of Korean women "as soon as possible," the foreign ministry said Thursday.

This came a day after the ministry's task force announced the outcome of its five-month review on the so-called 2015 comfort women deal, saying that there was sensitive part kept in secret apparently and called it an accord that lacked a victim-oriented approach.

President Moon Jae-in said Thursday that the accord is a gravely flawed deal that cannot resolve the historical issue and asked for follow-up measures. His remarks raised speculations that the Seoul government might push to amend or even scrap it. 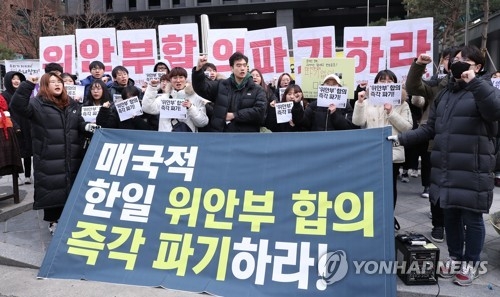 "(The government) will prepare sincere and practical follow-up measures as soon as possible on the principle of a victims-centered resolution and people's diplomacy to recover the honor and dignity of the victims and heal their wounded hearts," Noh Kyu-duk, foreign ministry spokesman, told a regular press briefing.

The spokesman added that the government will make relevant decisions "carefully" by making adequate efforts in gathering views and opinions from the victims, civic groups and experts and considering the possible impact on bilateral ties with Japan.

Foreign Minister Kang Kyung-wha earlier told reporters that she will meet all of the victims to listen to their views before making decisions on how to handle the comfort women issue.

Japan has urged South Korea to faithfully carry out what was agreed upon.

Following the task force's announcement, Japanese Foreign Minister Taro Kono issued a written statement in which he called on South Korea to keep the agreement intact and said that any attempt to amend what was agreed upon "cannot be acceptable" and would make ties with South Korea "unmanageable."

S. Korea to draw up follow-up measures on comfort women issue 'as soon as possible'

S. Korea to draw up follow-up measures on comfort women issue 'as soon as possible'