SEOUL, Dec. 28 (Yonhap) -- The main opposition Liberty Korea Party (LKP)'s reform panel on Thursday fleshed out its much-trumpeted vision of "new conservatism," as it seeks to shake off its tainted image and start anew.

The panel delineated core elements of the vision, including "responsibility for future generations," highlighting its push to move beyond a massive corruption scandal involving former President Park Geun-hye, which has shaken the party to the core throughout the year.

The panel wrapped up its inaugural five-month term, during which it had prodded the party leadership into both severing ties with the disgraced former leader and her allies and stepping up to unify the fractured conservative bloc for a stronger political presence.

"The LKP should not waver in its efforts for an end to old politics and a grand integration among conservatives," the panel said in a statement.

"The LKP and its members must thoroughly reflect on the failures of conservative politics. ... Only with exhaustive reflection and confessions can a path towards new conservatism open," it added.

The panel made the responsibility for future generations the foremost value of new conservatism.

"Based on historical experience, world trends and concrete facts, we will put forward bold national reform measures and strive to turn the next generations' anxieties into hopes," the panel said.

The list of values for the party's new vision includes shielding the market from government control; protecting citizens' right to life in the face of social, security and other challenges; and pursuing constant innovations for sustainable growth.

The vision also includes pursuing representative democracy -- an apparent criticism of so-called "square democracy," a term referring to the monthslong civic protests that led to the ousting the former president in March.

During this year's last session of the party's Supreme Council, its leader Hong Joon-pyo expressed an apology for a tumultuous year marked by a defeat in the presidential election, the expulsion of the former president and continuing internal division.

"Party colleagues and citizens ... I express my apology for the year," he said. "I will do well in the New Year."

Hong then pledged to redouble his reform efforts under the slogan of new conservatism. 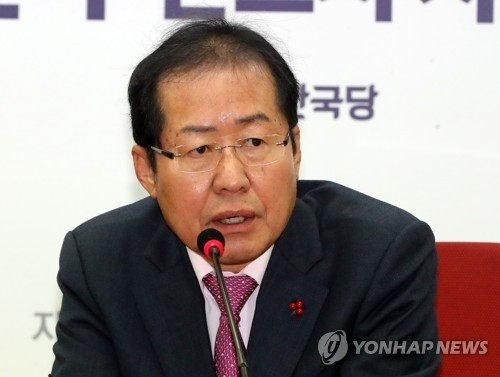