SEOUL, Dec. 29 (Yonhap) -- After a year-end dinner with close friends, Kim Ju-yeon reached for her hand bag, took out her smartphone and moved to send her portion of the bill via a popular app.

The dinner for four at a trendy restaurant in Seoul with coffee and cake for dessert, totaled about 160,000 won (US$150). Kim's friend paid by credit card. Each other person at the gathering then sent 40,000 won to the friend who paid the entirety of the bill.

Kim opened the application of Toss, the leading mobile money transfer service, entered her friend's phone number and the amount to be transferred and tapped the "send" button.

"It's very easy to send money. I don't have to ask for their bank account number but only need their phone number," said Kim, a 35-year old office worker. "The receiver gets a text message from Toss and enters her account number to receive payment."

Once the person who paid for dinner received three text messages, which took almost no time, everything was settled at the table and they left the restaurant.

Kim said that a few years ago the Dutch payment arrangement of each person paying for his or her meal could take several days. If she paid the bill, she would send her bank account number to the others at the gathering and ask them to send money via bank transfer.

At the time, people needed to turn on their computer or use their smartphone to connect to their online banking services to transfer their share. This process required PINs for bank accounts and financial authentication certificates, which was a time-consuming and inconvenient process.

Now, she and others just open the Toss application to do the same job. 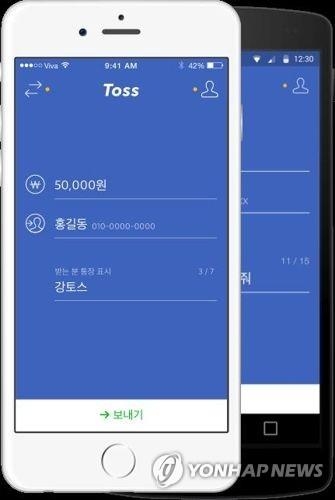 "Using Toss or other similar apps, I can skip all these bothersome procedures, like tapping in passwords, bank account numbers and overcoming other security firewalls," said Choi Jung-in, a member of the four-person dinner party. "I download the application on my smartphone first and register the bank account and PIN numbers before sending money."

She explained that the simple remittance service is very useful and convenient, especially in sending money for wedding ceremonies and funerals that she cannot attend.

Since launched in 2015, Toss has been spearheading the industry. It posted a cumulative 1.3 million downloads, with 10 trillion won in total remittances, as of December this year, according to the website of Viva Republica Inc., the developer and operator of the service.

It said it is in partnership with 18 commercial banks and two brokerage houses. Its application gives five free money transfers per month.

Along with Toss, there are about 13 mobile payment services available in South Korea, one of the world's most wired countries. 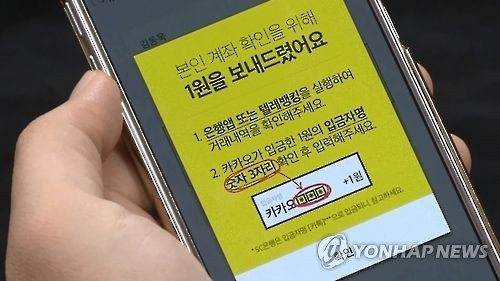 The number of daily mobile remittances reached 9.8 million in the third quarter, up 66.6 percent from three months earlier, with the daily value soaring 74 percent on-quarter to 48 billion won.

The number of daily transfers was 62,000 amounting to 2.29 trillion won in the first quarter of last year, when the Bank of Korea (BOK) started to compile such data.

"The apps are helpful because they make sending money much more simple and easy and they expand my smartphone experience," said Lee Eun-hee, a 38-year old lawyer. "Moreover, it's even safer than the way we used to send money in terms of personal information security. You don't have to expose your bank account number to a third party or carry your certificate code cards for mobile banking."