Pacquiao, the only boxer in history to win world titles in eight different weight divisions, had an eight-day vacation in South Korea with his family before flying back to the Philippines on Wednesday.

During his visit, the 39-year-old boxer filmed an episode of MBC's entertainment show "Infinite Challenge." On the variety show, which will air Saturday, Pacquiao appeared to have a bizarre fight with South Korean entertainers in the ring. A teaser for the upcoming episode showed Pacquiao facing the show's hosts with giant gloves, balloon dolls and other fun items.

"It was a wonderful experience for me," Pacquiao said through Second Thought, which organized his tour in South Korea. "I was amazed by their idea. I really enjoyed time filming the show."

In his second trip to South Korea, Pacquiao, who also serves as a senator in the Philippines, met with Seoul Mayor Park Won-soon and visited the National Assembly. He was appointed as a global ambassador for the South Korean capital city on Tuesday.

"I always get new feelings when I come here," he said. "This time, I enjoyed eating boiled duck cuisine." 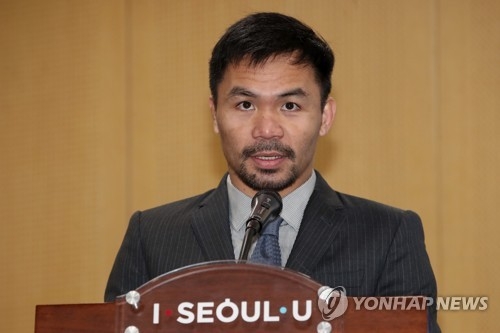 Pacquiao recently made headlines after he posted Ultimate Fighting Championship (UFC) star Conor McGregor's photo on his social media and told him to "stay fit." When asked about his possible bout against McGregor -- who lost his boxing debut against Floyd Mayweather Jr. in August -- Pacquiao said it was merely a rumor.

Pacquiao has 59 wins, seven losses and two draws in his pro boxing career. His most recent bout was in July in Brisbane, Australia, where he lost the World Boxing Organization welterweight title to Jeff Horn.

Pacquiao said there is a possibility a rematch with Horn could happen, since he picked up an "unexpected result," but nothing has been confirmed yet.