SEOUL, Dec. 28 (Yonhap) -- Reigning South Korean pro baseball league MVP Yang Hyeon-jong will stay with his original club for one more season after he inked a lucrative contract on Thursday.

The free agent pitcher re-signed with the Kia Tigers after he agreed to a one-year deal that will give him 2.3 billion won (US$ 2.14 million) next season. Yang is now the second-highest paid player in the Korea Baseball Organization (KBO) behind Lotte Giants slugger Lee Dae-ho, who receives an annual salary of 2.5 billion won.

Yang this year made a total of 2.25 billion won after he signed a one-year contract that gives him 1.5 billion won in annual salary and a 750 million won signing bonus.

Yang, a left-handed pitcher, set a career high with 20 victories in 31 starts in 2017, becoming the first South Korean pitcher in 22 years to notch 20 wins in a season. He posted an ERA of 3.44 to rank fifth in the league and claimed his first MVP award in November.

The 29-year-old was also voted the MVP of the Korean Series, as his Tigers knocked out the Doosan Bears in five games to capture their first championship since 2009. Yang threw a complete game shutout in Game 2 and came out of the bullpen to record a save in the clinching Game 5.

Yang is the first player to win both the regular season and Korean Series MVP awards along with the Golden Glove in the same season.

"I feel more responsibility with a high salary," Yang said. "Now, I want to focus on training and prepare for the next season." 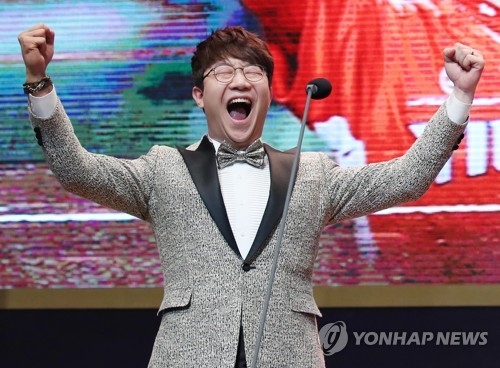