SEOUL, Jan. 1 (Yonhap) -- President Moon Jae-in on Monday vowed continued efforts in the new year to right the wrong and build what he called a sound nation.

"In the new year, I will hold your hand tight and keep moving forward with greater vigor. I will continue to devote my best efforts to set right the flaws of the past and bring about real changes in the lives of the people," the president said in his message for 2018 released by his office Cheong Wa Dae.

"Putting top priority in state affairs to improve the quality of people's lives, I will strive to prompt tangible changes to everyday life," he added.

The president was apparently referring to what he has repeatedly called deep-rooted evils that include corruption, abuse of power and social injustices.

Moon came into office May 10, one day after his victory in a rare presidential by-election caused by the ouster of his predecessor Park Geun-hye.

Since his election, the new 64-year-old president and his administration have been pushing for broad reforms, including fact-finding missions and prosecution investigations to reveal the truth behind major events under the former administration, including the tragic sinking of the Sewol passenger ferry in 2014 that left more than 300 people killed or missing. 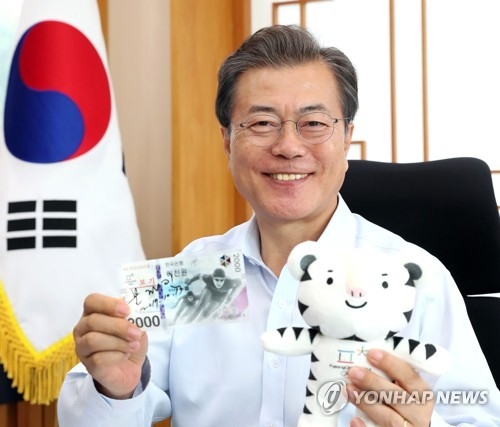 "We all have prevailed well over many difficulties in the past year. The whole nation came together with one single mind to create a properly functioning country and took a big first step forward," President Moon said.

"I will make more determined efforts to uphold the will of the people for a fair and just Republic of Korea. I am convinced that building a properly functioning country will provide a greater driving force for social unity and economic growth," he added, referring to his country by its official name.

Moon said the country has also made progress in the economy, noting the country's trade volume exceeded US$1 trillion for a second consecutive year with its annual economic growth expected to top 3 percent.

"These accomplishments are all the more precious because they were made in the face of political turmoil and security challenges attributable to North Korea's repeated provocations," he said. North Korea staged 11 missile provocations since Moon took office. The communist state also conducted its sixth and most powerful nuclear test so far on Sept. 3.

The president expressed gratitude to each and every citizen for helping to make such accomplishments possible.

"I am very proud of you all, and as president of the Republic of Korea, I would like to express my profound respect and appreciation to each and every one of you."

He called for additional efforts from the people in building a greater nation.

"In the new year, I look forward to seeing various dialogues exchanged at different levels of society, including the tripartite talks among labor, management and the government. If we make a little concession and share the burdens, we will be able to move one step closer to the Republic of Korea where all of us prosper together," he said.

The president also asked for more support for the PyeongChang Winter Olympics to be held from Feb. 9-25, saying the people's interest and support "will make the Olympics a great success."