Kim conducted 94 inspections between Jan. 1 and Dec. 28, compared with last year's 133, according to Yonhap News Agency's analysis of North Korea's state media reports. It marked the fewest public appearances since he took office in late 2011.

"Some analysis showed that this indicates that the regime has been stably controlled and (Kim) has strengthened internal solidarity, reducing the need for public activity," Lee Eugene, vice spokesperson at Seoul's unification ministry, told a briefing.

Military-related tours accounted for 44 percent, the largest portion, while inspections related to the economy came in at some 27 percent, it showed.

North Korea focused on nuclear weapons and missile programs this year. It conducted its sixth and most powerful nuclear test in September and launched intercontinental ballistic missiles (ICBMs) three times, most recently in late November.

In July and August, Kim engaged in no economy-related public events, as the North apparently focused on missile testing.

This year, Kim concentrated on advancing nuclear and missile programs, one pillar of his signature policy of developing nukes in tandem with the economy, commonly known as the "byongjin" policy.

Jo Yong-won, a vice director of the ruling party's central committee, accompanied Kim the most this year as 34 cases were recorded in North Korea's media reports.

Top military official Hwang Pyong-so used to rank first as an entourage member until October, but his name could not be found in the North's media since then as he was punished after the party's probe into a key military organ.

Lee said that she has no information to confirm a foreign report that Hwang may have been executed. 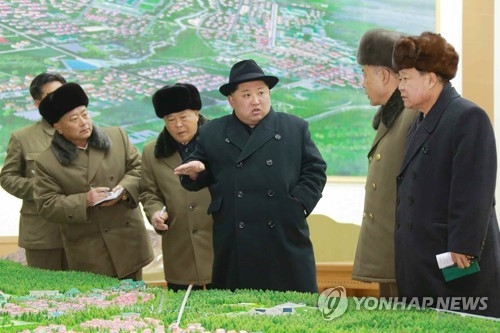