The yield on South Korea's three-year government bonds is projected to continue its uptrend next month due to overseas factors, ranging from 2 percent to 2.3 percent, according to the report by the Woori Finance Research Institute.

Currently, the return on three-year government bonds hovers around 2.1 percent.

The report said January's upturn will likely result from America's increased sales of government debt rather than expectations for further rate hikes in South Korea.

In late November, the Bank of Korea raised its key rate by a quarter percentage point to 1.5 percent, but it is expected to take a while for it to conduct another raise. 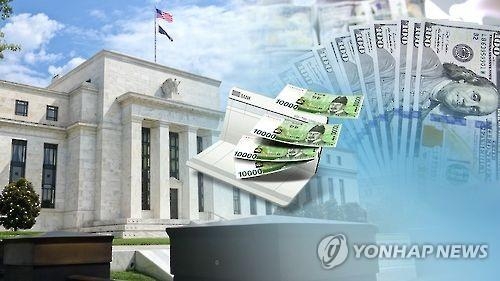 Following the recent parliamentary passage of a tax-cut bill, the United States is widely expected to post a budget deficit and increase Treasury sales to bridge the gap, which will in turn exert upward pressure on market interest rates.

Another negative factor is the possibility that the rate-setting Federal Open Market Committee may have more hawkish members next year, when four, including the Fed chair, are slated to step down, according to market sources.

The institute, meanwhile, predicted the South Korean won to appreciate against the U.S. dollar in January amid brisk exports and an inflow of investment funds into emerging markets.

In particular, the uptick in demand for chips is likely to last for a considerable period of time, leading South Korea's resilient exports and stellar corporate performances, it added.

"The yield on government bonds is expected to post moderate growth in January," said Song Kyung-hee, a senior researcher at the institute affiliated with Woori Bank. "The won is projected to gather ground against the greenback on strong exports and the inflow of foreign investment money but not much."
(END)