SEOUL, Dec. 29 (Yonhap) -- The leader of the ruling Democratic Party on Friday called for a new agreement to settle the long-simmering dispute over Japan's wartime sexual slavery in a way acceptable to the victims.

Choo Mi-ae made the remarks a day after President Moon Jae-in criticized the 2015 deal between Seoul and Tokyo as seriously flawed, as the negotiations failed to reflect the opinions of the victims and the citizens.

"We need a new agreement that can be accepted by the victims," Choo said during a meeting with senior party officials. "An agreement that aims to cover up the truth rather than uncovering it cannot be an (acceptable) agreement." 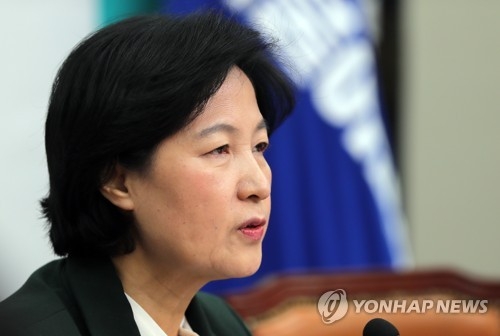 She then urged Japan not to respond "emotionally" to the recent review of the deal by the foreign ministry's task force, which concluded parts of the deal were kept secret to apparently avoid criticism of Seoul's concessions to Tokyo.

"Japan should refrain from emotionally responding and reflect on how it can resolve the issue in a way that serves its national interests," she said. "I urge Japan to act in a way that befits Japan's national prestige."

Tensions flared anew between the two neighbors after Seoul re-examined the bilateral deal reached under the former Park Geun-hye administration to settle the issue involving Korean women who were forced by Japan to serve at front-line military brothels during World War II.

Moon, who took office in May, has said that the agreement is "emotionally" unacceptable to Korean citizens.

Under the deal announced on Dec. 28, 2015, they agreed to "finally and irreversibly" resolve the sex slavery issue, while Tokyo apologized for its colonial-era atrocities and agreed to contribute 1 billion yen (US$8.9 million) to a foundation dedicated to supporting the victims.

The deal, however, prompted strong criticism from victims and civic groups who claim that Japan's apology was not sincere enough and that the government did not consult with them. Some call for renegotiating or even scrapping the deal.