The report comes amid the U.N. implementation of a punitive action on the North to place ceilings on coal purchases from it for its missile and nuclear provocations.

Obtained through the satellite-imaging and data company Planet, the satellite imagery of the three North Korean western ports -- Nampho, Daean and Songlim -- shows that over the past year heaps of coal at the ports have been running out, while there have been few vessels leaving and arriving at the ports, the broadcaster said. 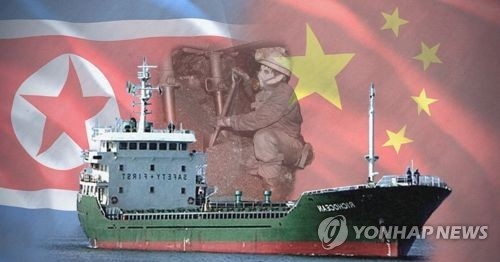 At the port of Nampho, the report said, three vessels had been spotted leaving after being moored, with the port full of coal last year. But the number of vessels moored at the port has fallen sharply since March.

"There were no vessels seen in the March satellite imagery, and the time of the port being empty was longer than ever in the April-November period," VOA said.

An analysis of satellite imagery involving the ports of Daean and Songlim, from which North Korean coal is exported to China, shows heaps of coals there have almost bottomed out.

VOA said the change is believed to have been made since Nov. 30, 2016, when the U.N. Security Council adopted Resolution 2321 in the wake of the North's fifth nuclear test in September. The resolution placed ceilings on coal purchases from the North, a move aimed at making it harder for Pyongyang to earn money that could be exploited to advance its weapons capabilities.

The port of Najin on North Korea's northeastern coast near its border with Russia, however, had briskly shipped coal until October this year.

In November, heaps of coal at the port began to bottom out and satellite imagery taken on Dec. 6 shows there only remains a small amount of coal, it said.

The U.N. resolution makes it an exception for Russian coal to be exported through Najin port.