SEOUL, Dec. 29 (Yonhap) -- Rival parties agreed Friday to extend the term of a parliamentary special panel on a constitutional revision by six months, ending a weeklong stalemate that delayed the passage of pending bills related to citizens' livelihoods.

The floor leaders of the ruling Democratic Party, main opposition Liberty Korea Party (LKP) and People's Party reached the agreement to enable the panel to continue operating until next July. The panel's term had been set to expire on Dec. 31.

They also agreed to make joint efforts to formulate the parliamentary proposal for the amendment "as early as possible" and hold further discussions next month to explore the possibility of crafting it by February.

The agreement came amid mounting criticism that due to the revision issue, the parties have been neglecting to handle urgent bills that directly affect citizens' livelihoods.

The standoff was caused by the LKP's rejection of the ruling party's proposal to hold a public referendum on the revision in tandem with the local elections slated for next June. The LKP has argued that holding the two polls concurrently would run the risk of politicizing the issue. 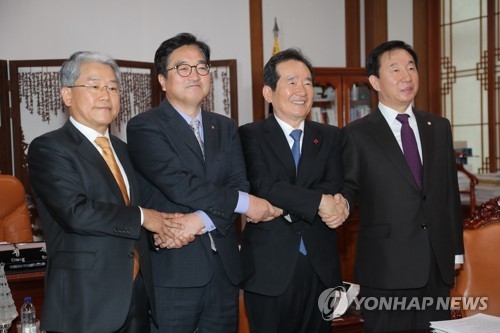