The North's ruler is widely expected to issue his verbal message through the country's state television at noon (Pyongyang time), experts say.

His speech will be closely monitored here to gauge whether he will launch a peace offensive toward Seoul and Washington in the wake of the country's declaration in November of the completion of its state nuclear force.

"North Korea could explore the possibility of talks with the U.S. and seek to improve its ties with South Korea while calling for recognizing it as a nuclear state," Seoul's unification ministry said in recent report. 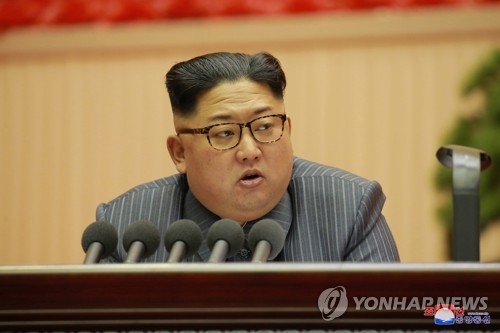 On Jan. 1, 2017, Kim said that his country has entered the final stage of preparing to launch an ICBM.

North Korea announced the completion of nuclear armament after firing a new Hwasong-15 ICBM in November which it says can put the whole U.S. mainland within range.

"At the New Year message, Kim may declare that his country is a nuclear state. He may propose dialogue with South Korea to implement two inter-Korean summit agreements and offer talks with the U.S. over nuclear disarmament," Yang Moo-jin, a professor at the University of North Korean Studies.

The U.S. has said that all options including military actions are on the table though it prefers diplomacy to resolve North Korea's nuclear issue. Pyongyang has stressed that it will not put its nuclear weapons on the negotiation table.

"The atmosphere for dialogue over inter-Korean ties and North Korea's nuclear weapons may start from May if the North suspends its nuclear and missile provocations during the Olympics, and Seoul and Washington's military drills are delayed or scaled down (not to coincide with the games)," the state-run Korea Institute for National Unification said.

Experts said that Kim may call for achievements in the economy in his New Year speech in the face of deepening international sanctions. Also he will likely urge fellow North Koreans to strengthen self-reliance to withstand the impacts of sanctions, they added.

The United Nations Security Council has slapped a series of tough sanctions on Pyongyang including the latest ones aimed at slashing refined petroleum product exports to North Korea by 89 percent. Analysts say that the sanctions are likely to bite the North from next year.

The North's leader is seeking the simultaneous pursuit of nuclear armament and economic development, commonly known as the "byongjin" policy.

But there have been no conspicuous feats in the economy since he unveiled a five-year strategy to boost the economy at the party congress in May 2016.

The North's ruler might be under pressure to show some economic achievements this year, which marks the 70th anniversary of the establishment of the North Korean regime, analysts say.

"He can claim victory in 2017 because of the progress on the nuclear deterrent. He will have to begin to show progress on the economy in order to nail down his bona fides as a strong leader," said Ken Gause, a senior analyst at U.S.-based CNA Corp.

"Unlike his father and grandfather, Kim Jong-un's legitimacy is tied closely to policy success." 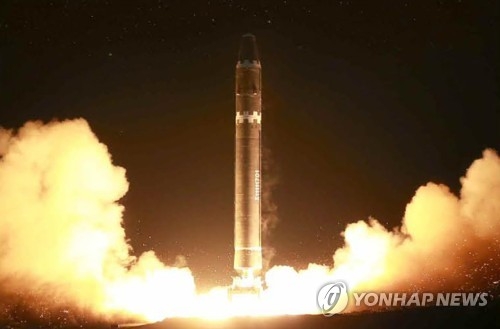