SEOUL, Jan. 1 (Yonhap) -- North Korea is ready to send a delegation to the upcoming PyeongChang Olympics to be held in South Korea, its leader said in his New Year's message Monday, raising expectations for an improvement in stalled inter-Korean ties.

Kim Jong-un's remarks came as a surprise as Seoul is pinning hopes on the North's participation in the games because the South believes that the move could help ease tensions on the Korean Peninsula.

Kim's conciliatory message is likely to lend support to President Moon Jae-in who hopes to see more engagement with North Korea. South Korea proposed in July to have inter-Korean talks on easing military tensions and holding reunions of war-torn families, but the North has kept mum toward the offer.

The South Korean leader proposed to the United States to delay their joint annual military drills that could coincide with the games. The North has long denounced the exercises as a war rehearsal and used it as an excuse for its provocations.

In contrast to his soft tone toward Seoul, the North's ruler warned that the U.S. cannot go against Pyongyang as it has a strong nuclear deterrence against it.

North Korea announced the completion of nuclear armament after firing a new Hwasong-15 ICBM in November, which it says puts the whole U.S. mainland within range.

Kim stressed that a button for nuclear weapons is always placed on his desk, warning that the U.S. should be aware that the North's nuclear force is a reality, not a threat.

"We need to mass-produce nuclear warheads and ballistic missiles and accelerate their deployment," he said. "We should always keep readiness to take immediate nuclear counterattacks against the enemy's scheme for a nuclear war."

Cheong Seong-chang, a senior research fellow at the Sejong Institute, said that Kim expressed active willingness to improve inter-Korean ties based on confidence that his country has completed nuclear armament.

"The North's nuclear and missile threats are likely to continue and advance, as he ordered the mass-production and deployment of nukes and missiles," the researcher said. "South Korea will have to deeply think about how to balance the resolution of nuclear issues and an improvement of relations between the two Koreas." 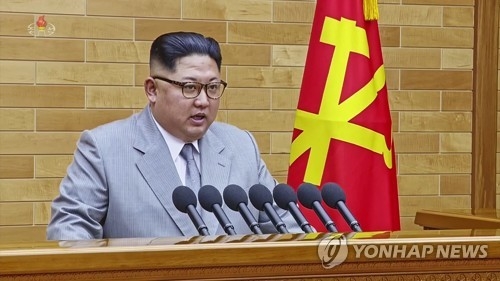