According to the data compiled by Infomax, the financial news and information arm of Yonhap News Agency, SK Corp. and other affiliates of the group sold a combined 4.32 trillion won (US$4.04 billion) this year as of Friday. This was followed by retail giant Lotte that sold 4.26 trillion won worth of debts, with tech giant LG Group issuing 3.32 trillion won and Hyundai Motor Group reporting 2.61 trillion won in bonds being sold. Heavy machinery conglomerate Doosan also sold 1.82 trillion won in debts through the year.

SK affiliates sold the largest amount of debt to refinance maturing debt and to capitalize on strong demand for their debt offering amid improved earnings.

Leading SK's debt offering was SK Corp., the de facto holding firm of the group, which floated 1.4 trillion won worth of corporate debt this year, as it attempted to finance a series of corporate takeovers and stake investments.

A huge chunk of the proceeds from the debt sale by Lotte affiliates was used to repay or refinance debt, according to the data.

Last month, the Bank of Korea raised the key rate by a quarter percentage point to 1.5 percent for the first time in 6 1/2 years, citing favorable economic conditions and low inflation pressure. 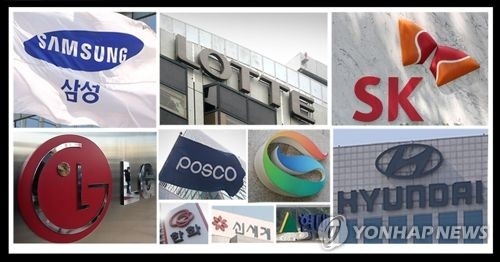 SK issued most debt among major biz groups in 2017

SK issued most debt among major biz groups in 2017