SEOUL, Dec. 29 (Yonhap) -- A former rail union leader on Friday was elected new chairman of the Korean Confederation of Trade Unions, one of South Korea's two labor umbrella organizations known for its progressive and militant stances.

Kim Myeong-hwan, who served as chairman of the Korean Railway Workers' Union, beat rival candidate Lee Ho-dong in a runoff vote. Kim won 66 percent of the votes against Lee's 27.3 percent. In the first ballot, Kim won the most votes but stopped short of winning a majority, thus leading to a runoff election.

During the campaign, Kim proposed eight-way talks involving the president and representatives from labor organizations, the government and the National Assembly to discuss labor issues.

"I will take the results of this election as a stern order to overcome divisiveness, isolation and incapacity, as well as an order to confidently take on negotiations with the Moon Jae-in government," Kim said in a speech after his election.

"I ask for a meeting with President Moon in order to resolve pending issues," Kim told reporters, calling for pardoning his predecessor Han. 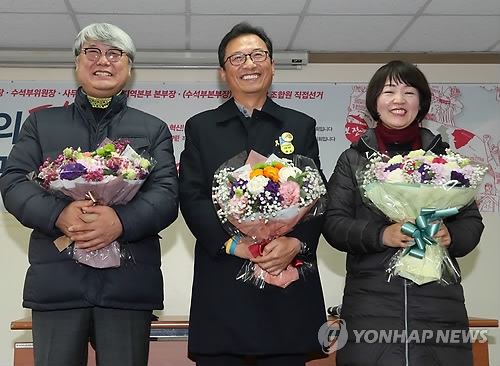