SEOUL, Dec. 31 (Yonhap) -- South Korea's central bank chief said Sunday that the expansionary monetary policy will be maintained in the new year in a way to further fuel the economic growth of Asia's fourth-largest economy.

"As the economy is expected to continue pulling off steady growth in the new year and there will likely be low inflation pressure, the central bank's monetary policy will remain expansionary," Bank of Korea (BOK) Gov. Lee Ju-yeol said in his New Year's message.

The BOK raised the country's base rate to 1.5 percent last month, citing a moderate recovery and little inflationary pressure. It was the first rate-rise since June 2011 and signaled that the central bank is set to end its monetary easing stance.

The central bank had kept the key rate at a record low 1.25 percent from June 2016 onwards as a way to lend support to the government-led economic stimulus drive.

Lee pointed out that the years-long monetary easing has caused some imbalance in the financial sector, such as the country's mounting household debt, which surpassed 1,400 trillion won (US$1.3 trillion) mark in the third quarter and could exert additional pressure on consumer prices in the long-run.

"Against this backdrop, the BOK will carefully watch the pace of economic growth, inflation and financial stability before tuning up our monetary policy plans," the central banker said. "The BOK will also study ways to improve the validity of its monetary policy in order to keep up with the changing economic environment and its impact." 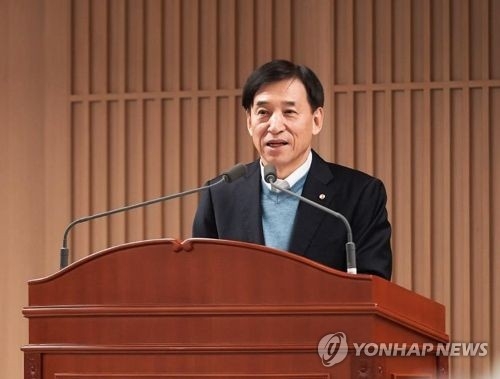