The H5N6-strain bird flu was detected on a farm with 35,000 ducks in Yeongam, 380 kilometers south of Seoul, while quarantine officials were conducting an inspection in the county, the Ministry of Agriculture, Food and Rural Affairs said.

It was located within 3 kilometers of another farm that reported the outbreak of a highly pathogenic AI on Dec. 19, which was put under restriction of movement of poultry, livestock breeders and equipment.

An in-depth analysis into the virus has been under way to figure out whether it is highly pathogenic and the inspection result will be released in a couple of days, the ministry said.

Highly pathogenic AI refers to viruses that cause severe disease in birds and result in high death rates.

South Korea has been stepping up quarantine measures in the southwestern region, including culling of over 200,000 birds, to prevent further spread of the highly contagious virus. 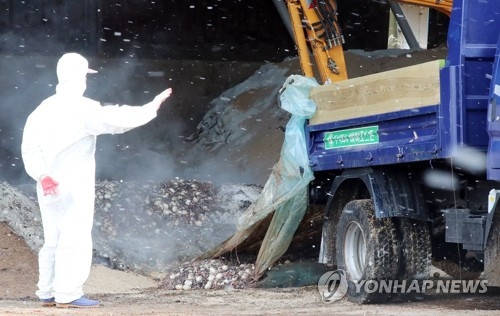