SEOUL, Dec. 30 (Yonhap) -- A fine dust warning was issued in Seoul for a second time in less than a week on Saturday, city officials said.

Such warnings are issued when the density of fine dust remains over 90 micrograms per cubic meter for more than two hours, according to the officials from the Seoul city government. The warning is removed when the reading dips to below 50㎍/㎥.

The warning, the second of its kind since Sunday, came one day after the central government issued a similar warning for the entire capital region that include the western port city of Incheon and Gyeonggi Province, triggering a set of emergency fine-dust reduction measures in the region.

The emergency measures include a mandatory cut in the operating hours of public entities and at construction sites. 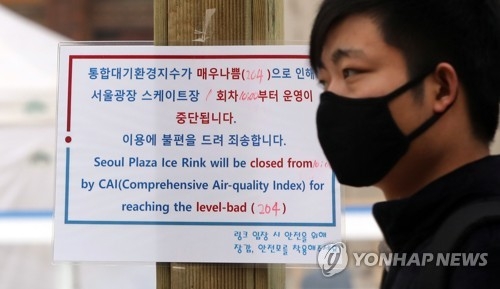