South Korea imported US$199.96 million worth of cigarettes in the first 11 months of this year, marking a 61 percent spike from $124.1 million in the entire year of 2016, the data from the Korea Customs Service (KCS) showed.

The 11-month tally already marked the highest annual total since 2002, the KCS said, noting the total for the entire year was well expected to surpass $200 million.

By country, cigarette imports from Indonesia took the largest share with $45.9 million worth of products shipped here in the cited period, followed by the Philippines with $36.06 million, the office said.

Italy took the third place as HEETS, a tobacco refill for an electronic tobacco heating device called iQOS, made a splash in the domestic market since its launch in June. Imports of the smokeless cigarettes for iQOS totaled $30.62 million over the period, raising the overall tobacco imports this year.

E-cigarettes accounted for about 3 percent of the nation's total tobacco market in the third quarter of this year, with vaping products rapidly catching up, according to industry data.

Philip Morris, which has the world's No. 1 cigarette brand Marlboro, accounts for 80 percent of the nation's HNB tobacco market, the data showed. 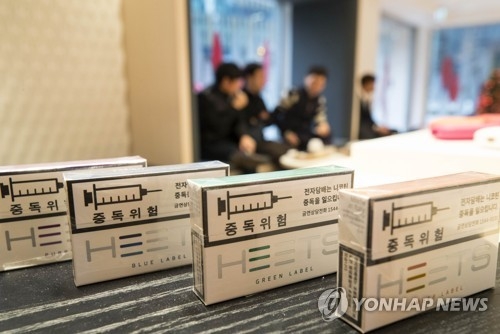