According to the sources, industry leader Hyundai Heavy Industries Co. is targeting US$13.2 billion worth of new orders next year, up 76 percent from this year's $7.5 billion. This year, it clinched $10 billion worth of orders.

Samsung Heavy Industries Co., another major shipyard, aims to secure $7.7 billion worth of orders next year, up 18 percent from this year's $6.5 billion, according to the sources. The shipyard also won higher-than-expected orders this year at $6.9 billion.

Daewoo Shipbuilding & Marine Engineering Co. set its annual order target for next year at over $5 billion. This year, it bagged $2 billion in new orders.

"Business conditions are improving on the back of a recovery in the global economy and stable oil prices," an industry source said.

But local shipyards are still struggling with a decline in the order backlog as they have suffered a sharp drop in new orders in the past two years.

The shipyards have been selling noncore assets, reducing workforces and implementing other cost-cutting measures to tide over a protracted industrywide slump.

Earlier this month, Hyundai Heavy decided to sell 1.3 trillion won (US$1.22 billion) worth of new stocks to improve its financial status.

The company has already carried out 3.5 trillion won worth of self-rescue measures.

Samsung Heavy has completed 65 percent of its self-rehabilitation plan worth 1.45 trillion won, with Daewoo Shipbuilding finishing 42 percent of its 5.3 trillion-won self-rescue plan. 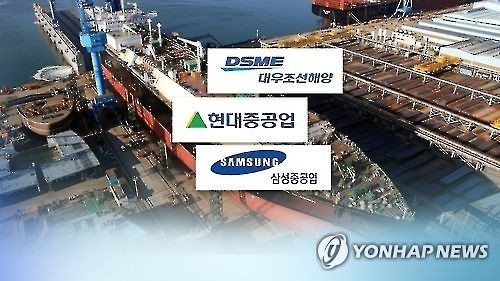